Activists from Reclaim the Power and Fuel Poverty Action staged a ‘duvet die-in’ at EDF Energy’s London HQ this morning (24 Nov. 2016), holding banners stating “Cold Homes Kill” to highlight the fuel poverty crisis. The action was in response to the 24,300 excess winter deaths for 2015/16 announced yesterday, which coincided with the release of the Chancellor’s Autumn statement. [i] 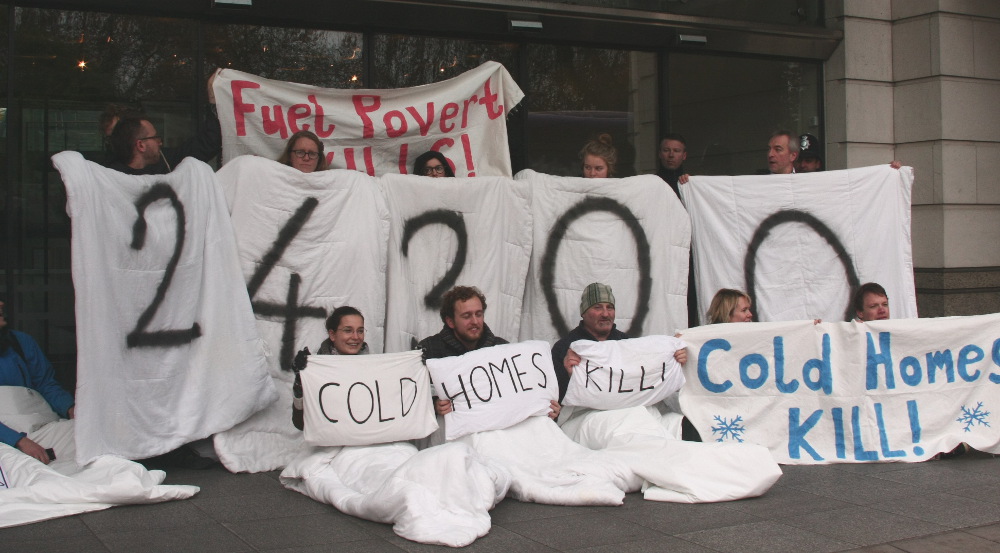 The protestors covered themselves with duvets outside EDF’s HQ at 40 Grosvenor Place, Belgravia, blocking the entrance and disrupting access to the building. They highlighted the millions of people struggling with fuel poverty in the UK and the thousands of avoidable deaths that have resulted from it. These deaths are due to declining incomes, cold, damp, poorly insulated homes and ever increasing energy tariffs. Meanwhile, the Big Six energy companies are making six times more profit than they’ve previously announced. [ii]

Leslie Smith from Fuel Poverty Action said, “We took action today to expose the massive profits that energy companies like EDF are making at the expense of people’s lives. The Government have tried to bury these deaths in the Autumn Statement news cycle, but with previous cuts locked in and fuel bills ripping us off, this problem isn’t going away. Theresa May might say she wants to helped the JAMS – those of us who are ‘just about managing’ – well we’re not just managing, we’re freezing.”

The World Health Organisation estimates that at least one third of winter deaths are caused by cold homes and fuel poverty. Although these excess winter deaths occur every year the chancellor’s statement made no mention of measures to help those in fuel poverty. Instead he announced freezes to welfare payments, whilst continuing to cut taxes for corporations, including the Big Six.

The Chancellor’s statement also made no mention of spending to reduce the effects of climate change. The campaigners today argue that bringing down energy bills to alleviate fuel poverty can go hand-in-hand with fighting climate change and that community owned and democratic energy can provide solutions to these problems. Instead, the Government is backing EDF Energy to build the Hinckley Point C nuclear power station, for which it will guarantee a strike price far above the cost of new renewables.[iv]

Dan Black from Reclaim The Power said “These deaths prove our energy system is broken. It’s not working for the most vulnerable in our country, or for the climate. We demand,warm, well insulated homes and clean and affordable energy, under the control of people and communities, not private companies. This is already happening in the UK and across the world, such as in Germany, but government policies and corporate interests are working against this.”