Reclaim the Power is a UK based direct action network fighting for social, environmental and economic justice. We aim to build a broad based movement, working in solidarity with frontline communities to effectively confront environmentally destructive industries and the social and economic forces driving climate change. 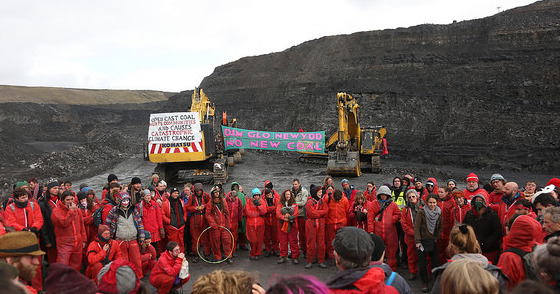 Reclaim the Power formed from the No Dash for Gas action group that occupied West Burton gas-fired power station in 2012. The following summer in 2013, climate and economic justice groups came together to connect the dots and challenge the undemocratic, unjust and unsustainable system that is forcing us towards the climate catastrophe whilst imposing austerity politics on the most vulnerable in society.

Since 2013, we have held large action camps in solidarity with frontline communities affected by fracking and fossil fuel extraction. We also support our movement allies working on fuel poverty, anti-racism, tax justice as well as opposing unjust trade deals such as TTIP (the Transatlantic Trade and Investment Partnership).

Reclaim the Power has its roots in the alter-globalisation movement of the 1990s and the Climate Camp network a decade later.

Find out more about how we organise here.

Direct action is about taking responsibility for the world around us – rather than deferring that responsibility to someone else such as a politician. It’s where we make an intervention, often physically with our bodies, in order to change a situation. It’s a necessary and important tactic which is being increasingly used in the struggle for environmental justice, particularly where legal, political and economic factors are stacked against us.

Reclaim the Power uses consensus-based decision making to give everyone an equal say, in contrast to majority voting whereby a large minority of people may have to live with decisions they completely disagree with. A consensus based system aims to reach decisions that reflect and synthesise diverse viewpoints as far as possible, thereby maximising people’s willingness to carry out those decisions.

We don’t have Chief Executives, Managers or Presidents. We aspire to organise non-hierarchically with decisions being devolved to working groups as appropriate. The working groups will sometimes select temporary spokespersons to make decisions on particular projects. We recognise, though, that unspoken hierarchies can still arise due to any one of the many ways that different privileges manifest themselves – and challenging these is a constant process .

All Oppressions are Linked

We actively aim to challenge oppression both inside and outside of our organisation. We recognise that the same systems of domination, unearned privilege, exclusion and institutional violence underpin many different forms of oppression. This is reflected by the aims and narratives of our actions and how we engage with people outside our organisation.

Within our network we aim to be open, welcoming and accessible to all. We also recognise that each of us is vulnerable to either consciously or unconsciously acting out oppressive behaviour towards others. Reclaim the Power operates a Safer Spaces Policy in order to begin to address some of these issues.

We Need to Talk about Capitalism

Climate change and environmental collapse are the products of an economic system based on infinite growth on a planet of finite resources, on colonial plundering and on the many inequalities of a class based system. The fight for climate justice cannot be removed from this social and economic context.

Our Role within a Diverse Movement

We recognise that social change involves many different roles, tactics, strategies and organisations. Whilst we are committed to building a direct action movement, we are happy to work with any group that shares our goals whilst upholding these principles.

What we mean by:

Frontline Communities: We recognise that some communities disproportionately face the harsh impacts of environmental degradation and climate change. We work in support of such communities in Britain and in solidarity with those elswehere where possible.

Consensus Based Decision Making: Consensus decision making is a creative and dynamic way of reaching agreement between all members of a group. Instead of simply voting for an item and having the majority of the group getting their way, a group using consensus is committed to finding solutions that everyone actively supports, or at least can live with.