RELEASE: Month of action closes with a one-woman lock on at Lancashire fracking site 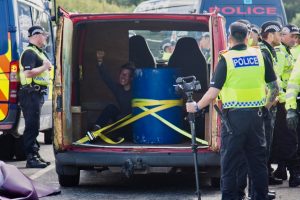 A van containing a woman and a one-tonne barrel ‘lock on’ has blocked the entrance to Cuadrilla’s controversial fracking site on Preston New Road this morning. The women is locked to a huge lock on device inside the van as part of an action which closes a month of action by national direct action group, Reclaim the Power.

“Throughout this month hundreds of people have taken action to support Lancashire, disrupt Cuadrilla’s fracking plans and demand renewables.

“Cuadrilla may have support of the Tory government and the complicity of the police on their side, but what today’s action shows is that even one person on their own can make a difference.”