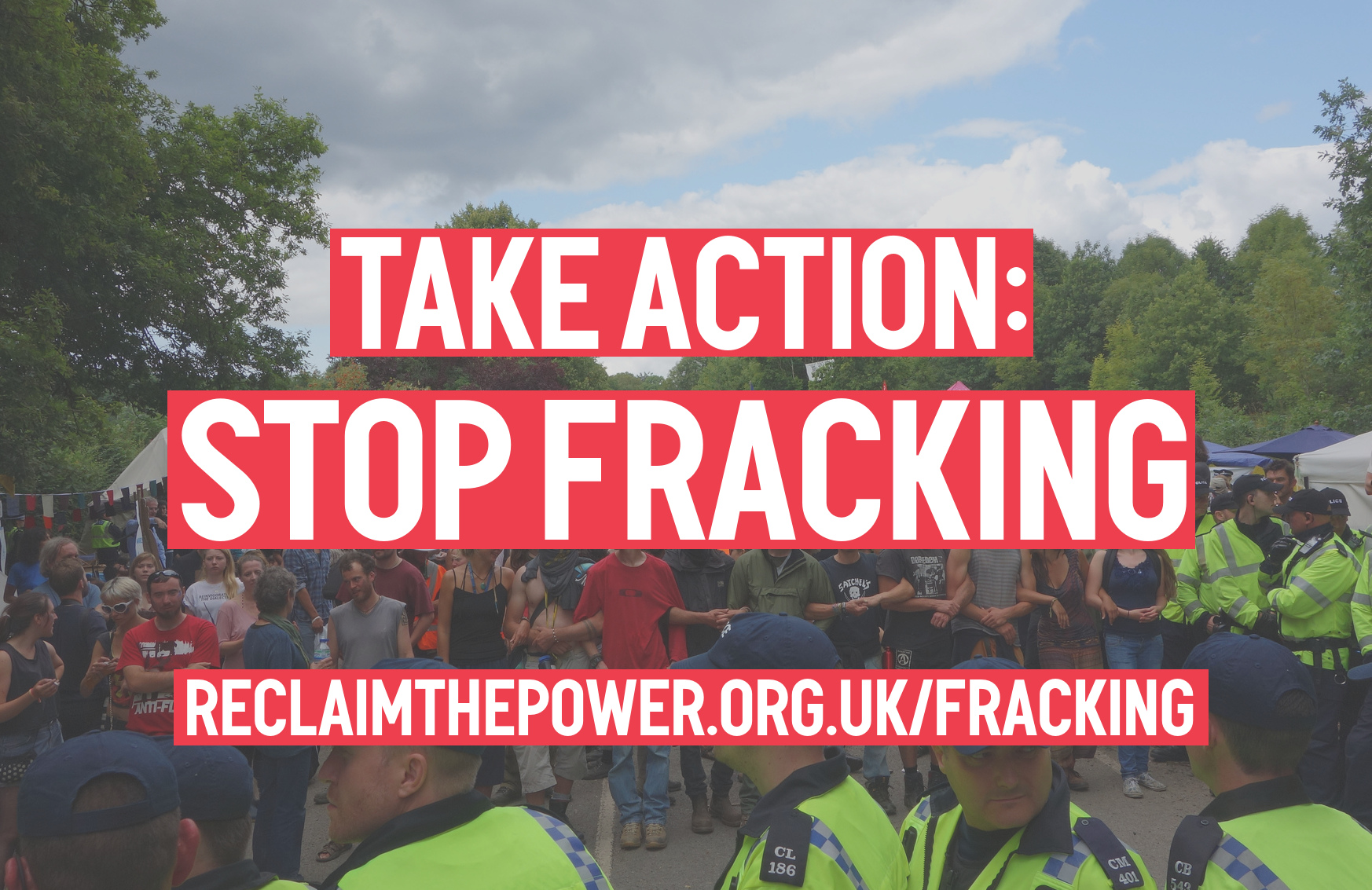 Cuadrilla have made an arrogant move towards fracking today by beginning preparation work around the site in Lancashire at Preston New Road. This is despite community opposition and pending legal challenges. This is their first in a series of steps to try and roll out a fracking industry in the UK.

As Reclaim the Power, our message is clear– we will not allow the development of a new climate and community wrecking industry. We will stand with the people of Lancashire and everyone fighting fracking across the country and beyond, we will put our bodies on the line to prevent this from happening. The democratic process has failed us, and now is the time for direct action.

Despite overwhelming public opposition and being rejected by Lancashire Council, 2016 saw the government grant permission to frack at a site in Preston New Road, Lancashire, with approval of a second site expected in the future.

There are still plenty of obstacles for Cuadrilla to overcome before they can start fracking. Today’s actions show their misguided presumption that fracking will go ahead and utter naivety to the movement that will resist them.

With fracking also given the go ahead in Ryedale, North Yorkshire, and the possibility of drilling beginning in Nottinghamshire at Easter, resistance is growing. A protection camp has already been set up in Yorkshire, and across the country support for fracking is at an all time low, with more people than ever galvanised to take action.

Reclaim the Power is ready to fight this on the ground– whatever the fracking industry is up to, we have our own plans to resist them every step of the way.

Early this year, we’ll be continuing to mobilise and train hundreds of people to take action – large numbers have already indicated they are prepared to join us. We will also be working with other groups to coordinate direct action, plus gearing up for our own set of actions around the country at a crucial moment this Spring.

We will show a united front against fracking across the UK; we can stop this destructive industry before it gets started.

Direct action gets the goods. Throughout history it has been a fundamental part of fights for social justice and change. When other means fail, it’s up to us to stand up and take action.

Join us by coming along to trainings and events touring the country in the coming months. We’ll be running a ‘mobilisation tour’ to get more communities organised and, later, a series of trainings in how to lead your own direct action against the industry’s plans.

The resistance to fracking is far from over – we have succeeded in delaying it for the past 5 years – but we’re playing a different game now. People are gearing up and we’re ready to fight.

Who are Reclaim the Power?

Reclaim the Power is a UK based direct action network fighting for social, environmental and economic justice. We aim to build a broad-based movement, working in solidarity with frontline communities* to effectively confront environmentally destructive industries and the social and economic forces driving climate change.

We’ve been working to oppose fracking since 2013 when we organised mass action at Balcombe. Since then, we’ve hosted anti-fracking action camps in Blackpool and Didcot, and taken countless actions to expose and resist the industry.