Every campaigner against fracking, every land defender, every health campaigner, every climate activist, everyone with an interest in breathing clean air and drinking clean water should know what is happening to Tina Louise Rothery.  Tina is one of the Lancashire ‘Nanas’ – a group of mothers and grandmothers who organise against fracking for the sake of their children’s health and wellbeing. Tina is right now being persecuted through the legal system by a notorious fracking company, Cuadrilla, for having stood up to them in defence of her community.  The litigation relates to Tina’s role in a 3 week community protection camp in Lancashire in 2014, and her subsequent refusal to pay Cuadrilla, who were renting the land for drilling, some £55,000 in compensation. Tina has been threatened with prison unless she capitulates, and complies with the court process, either finding the means to pay or by declaring bankruptcy. 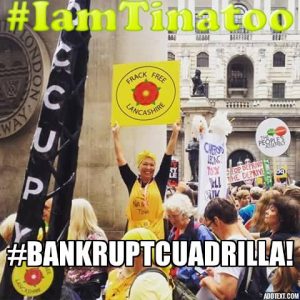 Lancashire was the first place in the UK to be subjected to fracking for shale gas, and Cuadrilla was the company who carried out this corporate assault in 2011. The fracking caused two earth tremors. Since then there has been huge, organised resistance to fracking in Lancashire.  Having been alerted to the risks, an anti fracking movement has also mushroomed nationally, and has been strong enough to keep full-scale fracking out of this country for years.  But there is a vast amount of shale gas underneath Lancashire, estimated to be worth many billions, and Cuadrilla didn’t give up.

The concerns of the Nanas in Lancashire were validated by Lancashire County Council last year. In 2015 the Council, having conducted a rigorous process, consulted widely and heard from experts, refused Cuadrilla’s planning applications for fracking. Cuadrilla then appealed this decision to the Secretary of State, who has since overruled the Council decision in relation to one of the two sites (the second site is  currently on hold but pending further information, the government have indicated they are likely to grant that application as well), in a move that shows utter contempt for local democracy. Also in 2016 full scale fracking has been approved in North Yorkshire. But no fracking has yet taken place, and local people and campaigners are determined to ensure that this industry does not get established.

Tina is one of many courageous people in Lancashire, who takes responsibility for her community, and had to take action when she found out that fracking was being proposed. She had heard about how fracking has been poisoning the water, soil and air in the US, the cancers and other health impacts, and its contribution to climate change. She would not stand by and let these harms be imposed on her community, for the sake of her children and grandchildren. The community protection camp Tina was part of was successful in terms of public engagement,  but it has come at considerable personal cost.

We can see in Tina’s story how the legal system really works, and in whose interest. The legal system prioritises private property interests above all other rights, including the right not to be harmed by having our air and water polluted, and by destabilising the climate. The legal system serves and legitimises the economic system that is focused on growth, which is incompatible with sustainability. This is a system that benefits a privileged few. Anyone that gets in the way of economic growth can expect to be labelled a criminal (or ‘domestic extremist’) and face close monitoring by the State and harsh legal consequences. Under this system, nature is property and a ‘resource’ valued purely in terms of its financial potential. Sustainability is illegal under the present system of law.

How did it get this way? Why should we just accept that a company has a much greater say in what happens in our communities, than we do? Why are we content to call this state of affairs a democracy? The answer has something to do with how embedded the concept of private property rights is in our culture. The Magna Carta in 1215 is considered to be a key moment for democracy. And yet the Magna Carta is the result of a compromise by the king to settle a dispute with the land barons in this country. It was primarily about the barons wanting to protect their property interests from encroachment by the king, not about enfranchising the masses. And today, when we hear politicians and lawyers speak of ‘rule of law’  – a big part of this is respect for private property rights and the near sacrosanct ‘right’ of landowners to do as they want with their property.  (Regardless of whether that ‘property’ happens to be land that is home to a range of wildlife, or land that people rely on for food, water, shelter, recreation, and community spaces.) Whilst there is now a whole body of environmental law that restricts what companies and real people can do with their land, the purpose of this law is the orderly use of resources, or the regulation of harms. It is not fundamentally about protecting nature for its inherent worth.

In recent times the privileges granted to corporations have increased. Companies are able to use the Human Rights Act 1998 to defend their property rights. Importantly in the context of fracking, the Infrastructure Act 2015 contains ‘a duty to maximise the economic recovery of petroleum’  (section 41) – in plain English, as George Monbiot puts it, ‘a legal duty to maximise greenhouse gases.’1 The Infrastructure Act also authorises trespass by fracking companies to drill under people’s land, where the drilling takes place 300m below the ground surface (section 43).  The government has also given clear policy statements setting out its support for fracking and fossil fuel industries in the UK in general. Clearly, this cannot be squared with the requirement to reduce emissions under the Climate Change Act 2008.

Tina is right to resist the oppression by Cuadrilla and the legal apparatus it is seeking to bear on her. Land defenders like Tina deserve our unconditional support. When people act collectively, they are much more powerful than any industry and the State. Nothing is inevitable. Tina will be in Preston court on Friday 9 December at 11am. Please support her any way you can including by attending court, making artworks, sharing memes, sharing articles, and using the hashtags #IamTinaToo and #BankruptCuadrilla.