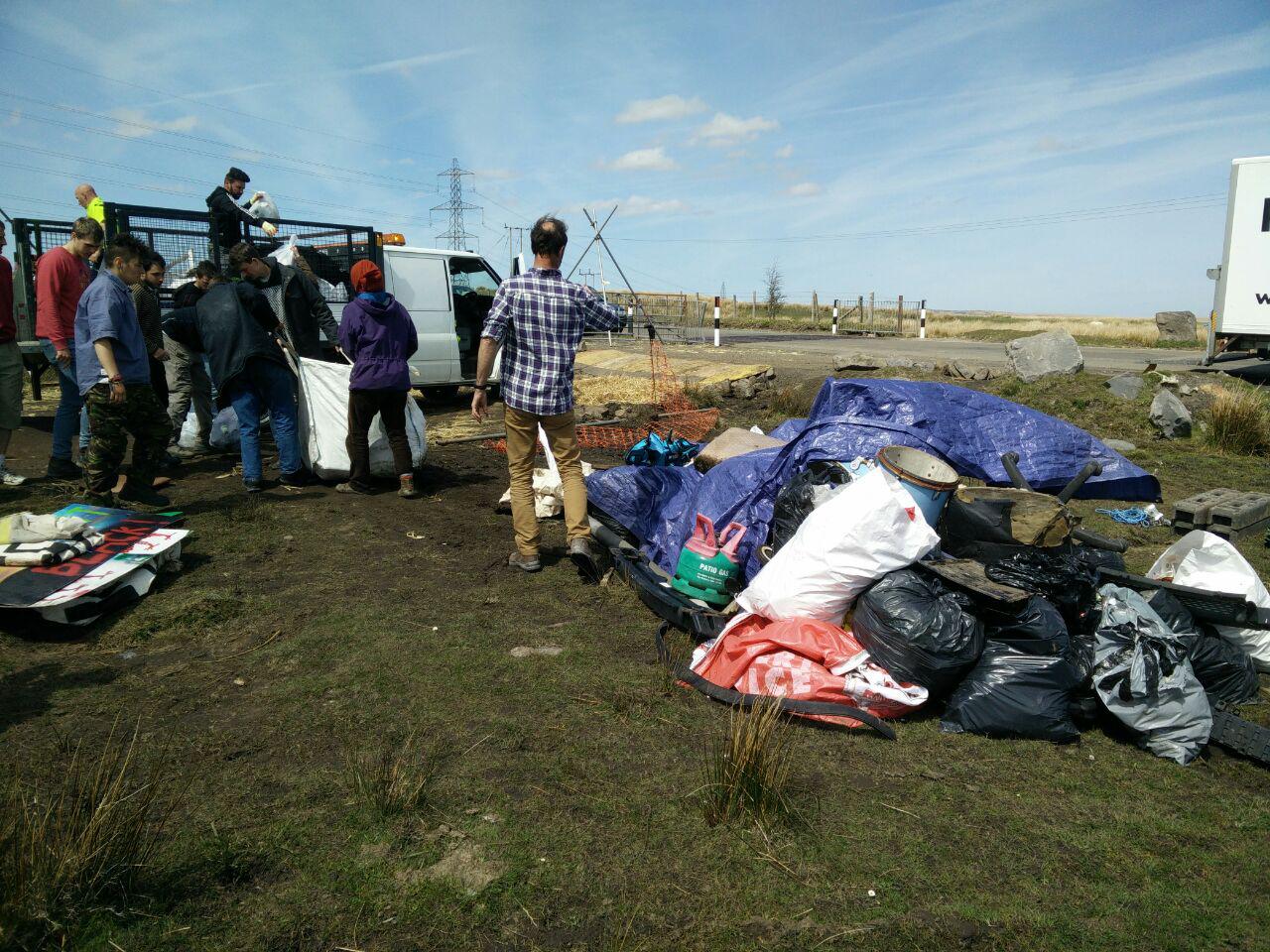 Some malicious rumours have been spreading that we didn’t clear up our waste from the camp. Here are  the facts.

Merthyr Common is beset by a huge fly-tipping problem. Coal mining company Miller Argent bizarrely claim to have tackled this issue through their Ffos-y-fran ‘Land Restoration Scheme’ – as if opencast mining a mountainside were necessary to clear it of litter. It’s PR greenwash, as we discovered.

When we got to the site last Saturday, we found all sorts of bizarre rubbish that had been dumped there, from a big fridge to a PlayStation 2, a glass coffee table and even an entire drum kit. Within hours of our arrival we were out with bin bags collecting as much of the fly-tipping as we could. We filled two enormous sacks with cans, bottles and plastic for recycling , just from the grass verge along the campsite frontage. We collected many, many more such sacks over the course of the camp, spending hours making the site  better than how we found it.

On Wednesday 4th May, the day we took the camp down, we meticulously sorted our own waste from the camp, and transported two commercial sized Biffa bins of recycling and one of landfill offsite in one of our own vans for disposal. We were left with a few sacks of waste from the tents that hadn’t been taken down at the time. 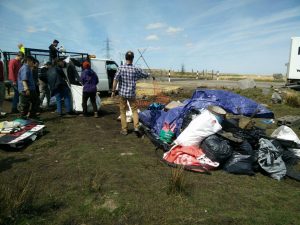 But the amount of fly-tipped rubbish we’d collected meant we needed to call up the council for help. A council truck pulled up on Wednesday afternoon and we filled it (as you can see in the photo). The truck was quickly filled, but the driver promised to return again the next morning to pick up the remaining waste. A similar verbal promise was given to the camp by the police earlier on that day. Clearly, we were too trusting. The council didn’t return on Thursday and still hadn’t on Friday.  They don’t work Saturday or Sunday, so the soonest collection would be on Monday.

For the past two days, we have rung, e-mailed and berated Caerphilly and Merthyr Councils and the police force to do what they promised and take away the rubbish. They still haven’t replied and still haven’t returned for the remaining rubbish. Inevitably, in the meantime, Miller Argent employees and mischievous journalists have tried to screw us over by photographing and filming the rubbish, alleging that we are hypocritical environmentalists for not disposing of it.

The reality is that we wouldn’t be being smeared like this if we hadn’t tried to pick up the additional fly-tipped waste – our own recycling and waste would have easily fitted onto our own vehicles and the single council van.

Caerphilly Council have let us down half a dozen times already so we will be exploring our own solution.

We won’t let Miller Argent or misleading journalism detract from the big picture. We’re proud to have held our camp at Merthyr, proud to have left the common better than we found it, and proud to have shut down the Ffos-y-fran opencast mine – by far the biggest eyesore blighting Merthyr Common!