Anti-frackers target haulage company in Lincolnshire who deliver to Cuadrilla 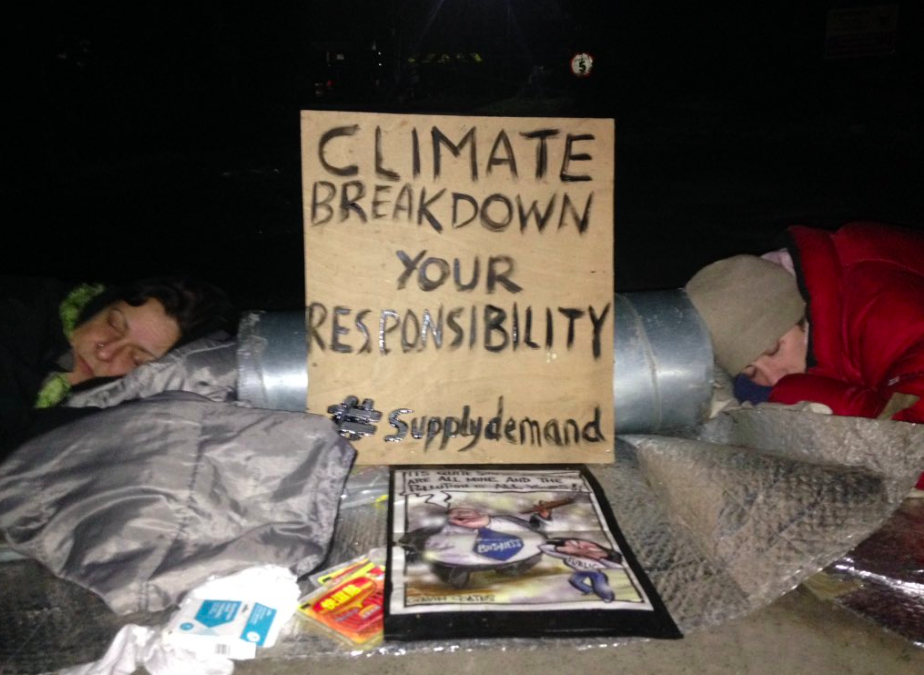 LINCOLN, UK – Anti-fracking network Reclaim the Power [1] are blockading S LYON & SON Haulage company in Lincoln who supply to the fracking industry [2].  This is part of a nationwide day of action targeting the fracking supply chain. Two of the activists have blockaded the entrance to the company’s headquarters by locking themselves together with arm tubes.  They are holding a sign saying ‘Climate Breakdown: Your Responsibility,’ and intend to stay for as long as possible. S LYON are a haulage company who have provided services to numerous fracking companies including IGas Energy, Dart Energy, Cuadrilla Resources and Rathlin Energy.  S LYON also has close ties to drilling company Meehan drilling [2].

Tilda who is locked on in front of the company’s entrance said:

‘We are paying S LYON and SON Haulage suppliers a visit to ask them to stop being part of such a destructive industry and supply chain. The fracking industry will contribute to climate chaos and they have been heavily involved in delivering to shale exploration sites. It’s time we realised we are part of nature and we are killing ourselves. We are damaging homes, habitats and health. Fracking must stop and we need companies to realise the future is in clean, affordable and publicly-owned energy and a just transition away from fossil fuels.’

Reclaim the Power are today protesting against fracking and its supply chain and financial backers around the country in Leeds, Cambridge, Manchester, Windsor, Bristol. They are protesting at HSBC bank who fund fracking company Igas and outside Centrica in Windsor who finance Cuadrilla.

Ross Monaghan who is also at the protest continued,

‘Fracking companies don’t exist in isolation. For the industry to survive they need access to our land, our water and our sand. It needs its drills, diggers and lorries. It needs money, spin-doctors and politicians in its pockets. We cannot stay within our commitment to the Paris agreement whilst also investing in a new fossil fuel industry. It’s time for companies like S LYON to stop backing the wrong horse and support industries which don’t wreck the planet.’’