Five people from Reclaim the Power and Earth First! stopped work at the UK’s largest opencast coal mine, Ffos-y-fran near Merthyr Tydfil, South Wales for ten hours today. Three people locked to an excavator with a banner saying ‘End Coal’. Two people locked to a key access road, preventing coal leaving the coal mine to the railhead. Every day this week a train has transported 2200 tonnes to RWE npower’s Aberthaw near Barry, South Wales.[1] Aberthaw is the UK’s dirtiest power station[2]. Today is also the UK’s first working day where no electricity has been generated from coal in the UK. 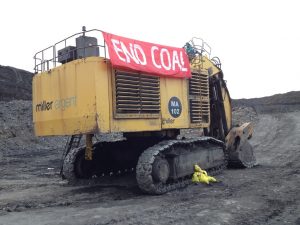 Miller Argent’s Ffos-y-fran opencast coal mine is the largest in the UK. Recently the United Nations called for an investigation into cancer and childhood asthma incidences in the population near to the mine.[3] The protestors are joining local peoples’ call for the full restoration of Ffos-y-fran now.

Alice who is dressed as a canary locked to an excavator said, “Today the UK hasn’t generated any electricity from coal. This shows that it is possible to move away from destructive fossil fuel generation. Neither coal nor gas can achieve the type of greenhouse-gas reductions demanded by international bodies such as the IPCC.   The shift away from coal would not be possible without decades of community resistance and action from the movement for climate justice.  In traditional underground mines canaries were used to alert miners to air pollution. Today we, as canaries are warning that we need to take urgent action against coal to tackle air pollution and climate change”

Alex, also locked on added, “RWE npower talk of swapping to imported coal, but while the conditions surrounding Ffos-y-fran mine are unacceptable, the situation for people living close to the coal mines in Russia and Colombia, where most of the UK’s power station coal comes from, are completely unbearable. It is long past time Ffos-y-fran was restored and absolutely time that Aberthaw was shut down.” 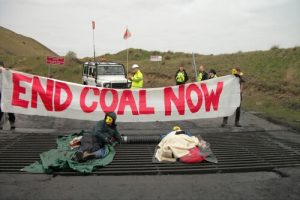 In 2015 38% of coal imported to the UK came from Russia and 29% came from Colombia.[4] In these countries the situations surrounding the opencast coal mines amount to cultural genocide, with indigenous and settled communities being forced from their land.[5] Miller Argent’s main customer for coal from Ffos-y-fran is Aberthaw power station.

Sian Farrar, a local resident of Rymney, a neighbouring village, said, “Those of us who live here see the black coal dust outside every day – we are breathing this in constantly.. Add to that the more dangerous invisible pollutants from the power stations, and it’s clear this industry is toxic for local communities, in Wales and globally. I stand in solidarity with global communities affected by UK coal-fired power – RWE must stop sourcing coal from my backyard, and must not subject other communities to these impacts.’ 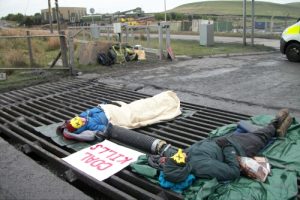 Chris who is currently locked to the access road said, “I am taking this action today because RWE npower is burning Welsh coal which when burnt releases high levels of CO2 contributing to climate change and nitrogen oxides causing respiratory illness. [6] The European Union have ruled against the UK government for allowing this NOXs pollution to happen, but no action has been taken. This is simply not acceptable.”[7]

They continued, “The solution to the air pollution We need to stop burning fossil fuels. caused by burning Welsh coal isn’t to import coal instead, as RWE npower suggest. Swapping air pollution in the UK for coal dust which contaminates the water, land and air in Russia, Colombia or even Australia, to keep Aberthaw going simply cannot go ahead. [8]All coal mines need to be restored and the power stations must be shut down now.”

This action is part of a series of demonstrations against Aberthaw power station calling for it, and all other UK coal power stations to close. [9]

A Welsh speaker is available to speak as a local resident affected by the mine.

[8] Luz Ángela Uriana Epiayu, of the Wayuu in Colombia said, “My son Moisés Daniel is sick with a high fever and a dry cough, and he is having trouble breathing… He is still only three years old. I live very close the Cerrejón coal mine… Because of the coal dust created by Cerrejón Moisés gets this dry cough… He breathes contaminated air twenty-four hours a day.” Uriana Epiayu, LA (2017) RWE npower Colombian coal is killing our children! Close Aberthaw!Cerrejon is the largest Colombian coal mine it supplies Drax power station and other UK coal power stations. It is owned by Glencore, Anglo- American and BHP Billiton, all listed on the London Stock Exchange.

[9] This action is the latest in a series of actions against Aberthaw power station. These have included a blockade of the power stations main entrance using two tripods for over 4 hours in December. 150 people demanded “Shut Aberthaw: Green jobs now!” at a demonstration against the power station on Saturday 28th January organised by Reclaim the Power, Coal Action Network and United Valley’s Action Group and a demonstration at RWE Npower’s headquarters in Swindon earlier in January.