LANCASHIRE, UK — This morning, three generations of a Lancashire family have taken action against the fracking industry, blockading the gates to Cuadrilla’s proposed site on Preston New Road. The intergenerational action saw four members of the same family ‘lock-on’ in protest of plans to frack on the Fylde Coast [1]. 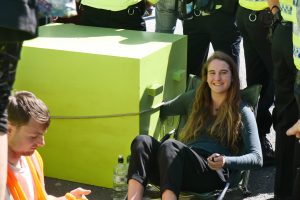 The family members locked into boxes reading ‘families against fracking’ outside the gates of the Preston New Road exploratory fracking site.

Gillian Kelly (73) – mother of Sebastian and grandmother of Megan, locked on at the site – commented:

‘I’ve never done anything like this before, but I can’t sit idly and watch the place I was born and raised be poisoned and polluted by fracking. I feel now I’ve got to make a stand. This will affect my whole family and their futures; my sons, my grandchildren – and that’s why we’re taking action together as a family today.’

The lock on followed a silent demonstration by over 100 women from the anti-fracking community, entitled ‘Call for Calm’, seeking an end to increasingly violent police and security tactics witnessed at the site [2]. 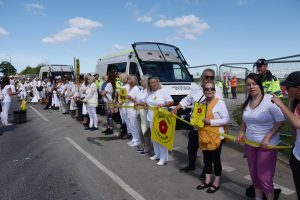 Today’s action comes as part of the ‘Rolling Resistance’ month of action, organised by local anti-fracking groups and national network Reclaim the Power. It aims to disrupt work at Cuadrilla’s site every day in July [3].

The blockade marks the eighth working day disrupted at the site since the beginning of the month – actions so far have included multiple lock-on blockades, a mass public demo last Friday, and people climbing onto delivery lorries [4].

For a round up of last week’s actions, see: reclaimthepower.org.uk/news/rolling-resistance-weekly-round-up-what-a-start/