London, UK — This morning the ‘Renew-Rebels’ group of activist clowns from climate action network Reclaim the Power [1] staged a wrestling match outside Barclays in Piccadilly Circus, in protest at its 97% stake in fracking company Third Energy [2]. This creative protest formed part of two weeks of action against the fracking supply chain, which last week saw protesters in Lancashire blockading a quarry on swings [3]. 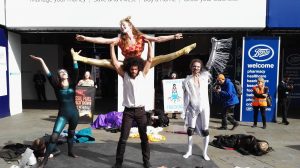 Barclays customers and staff stopped to watch the ‘Fossil Fuel Smackdown,’ held directly outside the glass windows of the Piccadilly branch, in which clowns representing Wind, Tidal and Solar ultimately triumphed over Coal, Oil and Fracked Gas in a series of wrestling bouts.

Michelle Tylicki, one of the clowns, said:

“With today’s performance we hope to deliver a knockout blow to Barclays’ fracking company Third Energy.

Our performance today is comedic but the issue of fracking is serious. Fracking has no public backing, destroys the climate, and threatens to wreck the local community in Ryedale. The government has failed us so far, so it’s up to us clowns to take action.

Fossil fuels may currently have the backing of Barclays’ billions but we’ve shown today they can’t survive a body slam from Renew-Rebels. It won’t be without a fight but fracking is going down. Barclays should switch its investments and back a real winner.”

The performance included elaborate costumes and characters. The character of Fracked Gas was dressed in shredded cargo pants and a toxic looking faux fur. Her special attack was a body-shaking earthquake, mimicking fracking’s effects on local communities.

Elliot Fletcher, one of the clowns, added:

“With rebel clowning we are blurring the boundaries between culture and resistance, and hope to communicate the need for a renewable energy transition in an accessible way. Fossil fuel extraction affects all living creatures including people’s lives here and abroad – we won’t accept it.

The ‘Renew-Rebels’ aim to take the performance around the UK, using theatre to engage the public in the energy debate and promote a smooth transition to clean forms of energy”.

This is day 10 in the ‘Break the Chain’ fortnight of action targeting companies propping up the UK fracking industry. So far there have been over 10 actions including Reclaim the Power activists shutting down fracking site suppliers Aggregate Industries in Lancashire for 11 hours by hanging from playground swings, invading Centrica’s head office in Windsor and taking over bus stops around Leeds with ‘sub-verts’ targeting Yorkshire Water. [4]

The clowns said they were using their performance to protest against plans by company Third Energy to begin fracking in Ryedale, Yorkshire. Third Energy was given the green light to frack in December 2016 despite thousands of objections and sustained local and national pressure [5]. Only 18% of the British public support fracking [6].

The fortnight of action aims to disrupt and expose the network of companies supporting fracking, and encourage more to pull their contracts; at least 5 companies have already done so after increasing public pressure [7]. ‘Break the Chain’ comes ahead of expected further action this summer supporting locals resisting drill sites in Lancashire and Yorkshire.

1. Reclaim the Power is a UK-based direct action network fighting for social, environmental and economic justice. They have been working to oppose fracking since organising mass action at Balcombe in 2013. Since then, they’ve hosted anti-fracking action camps in Blackpool and Didcot, and taken countless actions against the industry. Read more at: www.reclaimthepower.org.uk
2.  Barclays own 97% of Third Energy who want to frack in Ryedale, North Yorkshire https://www.foe.co.uk/blog/why-barclays-fracking-excuses-dont-add
3. http://www.lep.co.uk/news/road-blocked-due-to-fracking-demonstration-1-8460116
4. See the full list at www.reclaimthepower.org.uk/break-the-chain
5. For examples, see Drill Or Drop (www.drillordrop.com/2017/03/01/drilling-diary-march-2017)
6. Statistics from BEIS Public Attitude Tracker (www.gov.uk/government/statistics/energy-and-climate-change-public-attitudes-tracker-wave-20)
7. Quarry operators Armstrong Aggregates have recently terminated their contract with fracking company Cuadrilla after local protest. Moore Readymix concrete company have also ended their contract.