This morning eight protectors from South Yorkshire, Derbyshire and Nottinghamshire have blockaded the Preston New Road fracking site to protest against plans to extract unconventional gas in Lancashire and across the country.

The blockade started at 5.15am on Thursday 20th July. Protectors used heavy ‘arm-tube’ devices to lock on in pairs spanning the width of the Cuadrilla gate. 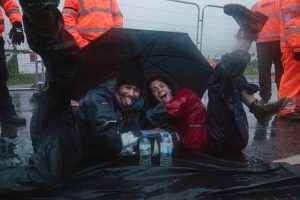 Nicole from Mosborough Against Fracking explained:

“Fracking isn’t just threatening the water and peoples health up here in Lancashire – it’s happening right across the country. I live in an area that is currently being seismic surveyed by INEOS and we’re determined not to let them get as far as Cuadrilla have here.”

“Cuadrilla’s site at Preston New Road is the flagship project for the entire Hydraulic Fracturing industry in the UK. All the different fracking companies are watching how things play out here to determine the feasibility of their projects. Cuadrilla is already months behind schedule and investors are pulling out of the industry. It is crucial that we all unite to prevent this from going ahead here, as this will influence unconventional oil and gas projects right across the country.”

“I am here to say NO! to the corporations and politicians who are ignoring the powerful truth around rapid climate change.  The scientific community tells us clean energy sources are fully capable of providing for our individual and industrial needs. All that is missing is the personal, political and corporate will to leave our addiction to fossil fuels behind and begin a collective move into a kinder and more sustainable way to co-exist on the planet.” 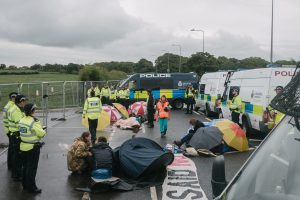 Today’s action comes as part of the ‘Rolling Resistance’ month of action, organised by local campaigners [1] and national network Reclaim the Power, [2] aiming to disrupt work at Cuadrilla’s site every day in July.

Since the beginning of the month work has been disrupted for 8 working days, the longest blockade on July 3rd – 4th lasting 36 hours. [3]

Following years of local resistance to fracking in Lancashire, growing protests by local community members have been taking place every day at Preston New Road since January, to say “Not here, not anywhere” to fracking. This has caused months of delays and millions of pounds of losses for Cuadrilla, and supply chain companies are cancelling their contracts. A new survey by YouGov has shown that 66% of Lancashire residents oppose fracking near their homes. [4]