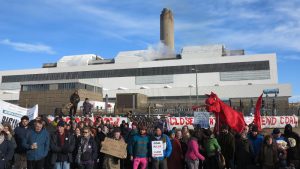 RWE npower were expecting us, and as a result there were no works vehicle movements for at least 4 hours, at an entrance which normally has HGVs every few minutes. Gathering at the power station was effective in raising awareness of the issues as well as causing Aberthaw to cancelled all deliveries and the removal of coal ash.

Demo on the beach
Marianne Owens from the PCS union said, “It’s working class people who suffer from this dirty energy,” as she addressed the crowd from the sea wall. She demonstrated that moving to green energy would create more jobs than exist in the fossil fuel industry.

Anne Harris from the Coal Action Network said, “Saturday’s demonstration at Aberhaw power station sent a clear signal to its operators RWE npower and the government, that the public demand that this power station is promptly closed. Children, working people, pensioners, Welsh people and those from as far away as Machylleth and London gathered on the beach.”

There were a number of angry local residents at the demonstration who feel like they’ve been sacrificed to this power station, as highlighted by this comment on the Coal Action Network’s web page about the protest local resident. Roy Shropshire said, “We have lived in Rhoose for almost 40 years, complained many times to the EPA/NRW [Environment Agency and National Resources Wales] of what we considered to be unacceptable levels of pollution… Clearly, there has been a failure to inform us of the known dangers and a disregard to our health and well being. Clearly, those responsible should now be made accountable.”

RWE’s Aberthaw power station kills 400 people a year, 67 of them in Wales, as it pumps out huge quantities of toxic nitrogen oxide. The government lost a case at the European Court of Justice for allowing the power station to poison so many people. UK government had given RWE npower an exemption to EU air quality rules, which should never have been granted.

The wider picture
But it’s not just Aberthaw that we need to ditch. The government is expected to put £453million into keeping coal-fired power stations open across the UK over a 4-year period; causing 2,900 premature deaths per year from air pollution, on top of prolonging the health impacts on local people from the open-cast mines, and the human rights atrocities which occur in Colombia and Russia who are importing coal to these power stations.

These government handouts are occurring alongside a supposed ‘coal phase-out’ which the government claims will mean we see the back of power stations like Aberthaw from 2025. However, a glance at the phase-put plan reveals a host of loopholes, not to mention a financial mechanism to keep these monstrosities financially buoyant.

That’s why Coal Action Network also showed up at government offices for the final day of the coal phase-out consultation – just in case they hadn’t got the message yet that we want coal to end now. 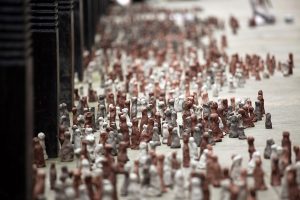 Clay figures representing the 2,900 deaths in the UK caused by the coal mining industry were arranged outside the Department for Business, Energy and Industrial Strategy

By carefully placing 2,900 small clay figures outside BEIS (Department for Business, Energy and Industrial Strategy), we held a space for those lives which could be saved every year if we ditched coal now. For those people, and those on the front lines of coal extraction, 2025 is not soon enough to end coal. A plan that funds power stations to keep polluting and causing more deaths every day doesn’t sound like a plan to us.

We were joined by Seb Munoz from War on Want, who could give first-hand accounts of the atrocities in Colombia associated with UK coal. We heard from the PCS Union about how the movement against coal and Union struggles can unite. Guy Shrubsole from Friends of the Earth told us about the incredible community resistance to opencast mining in Druridge, and we heard from BiofuelWatch about how we could resist Drax, the ‘Goliath’ power station.

With all the uncertainty of the governments strategy around coal, one thing remains clear; the movement to end it now is creative, dynamic, diverse and determined.