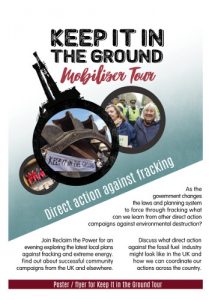 Reclaim the Power is on the road. Over two weeks a shifting cast has zigzagged across the north of England offering workshops on fracking and direct action. This “Mobiliser Tour” represents RtP’s opening salvo in a pivotal year of action, training and (much) more action as we lend our weight to the considerable efforts of the nationwide anti-fracking movement this year. We aim to help build a snowballing mass resistance that will see fracking sent packing from the UK.

Week One saw events in York, and Retford in Notts, each of them within striking distance of sites with permission to frack. I signed up for Week Two. It is the first time since a spell touring in bands long ago that I’ve done anything like this, and the Mobiliser bears many similarities to those adventures, in terms of the excitement and intensity, camaraderie and exhaustion, and the temptation to live on bad food. I collapse into bed each night, talked out and worn out, but fulfilled and swimming with rich impressions.

Hunting down the miles in our doddery estate car, we arrive each day at community centres, cafes and village halls. There we tack posters and displays to the walls, lay out resource tables of leaflets and factsheets, set up the projector, divide up presentation sections between us, grab food and wait for participants to arrive.

First up on Monday is Darlington where despite a last minute scramble to set up, it is wonderful to see how enthused and galvanised the participants are come the end. That is the tour’s last stop in the east before we roll across the Pennines towards the western counties. I will long remember the broiling ferment at our Lytham St Annes event on the Wednesday, filled with tired but determined residents long since joined in battle against the nearby Preston New Road fracking site. The previous evening a flood of questions and discussions flowed from attendees in Wigan who find themselves abruptly bounced into the frontline fight at the same site.

The events are a mix of presentation, discussion and exercises, intended to offer an engaging, accessible introduction to direct action and its potential in the fight against fracking. There isn’t time to offer full direct action training in the two hours we have (that will come later in the year); our aim here is rather to inspire and empower.

The context is a situation where tireless community and public resistance has left the UK frack-free for almost six long years, but in which the government has lately been doing its level best to tilt the playing field to favour fracking. Laws and planning regulations have been made and changed to expedite the roll out of fracking, irrespective of public opinion or local democracy. Tax incentives have further sweetened the deal for an industry which, thus encouraged, is now seeking to get its wells in the ground in 2017.

Given this state of play, direct action is often the only option remaining for communities seeking to protect health, land, water, air and climate. At the same time, whilst public opposition to fracking is widespread, many people may not be familiar with, nor perhaps view themselves as the kind of people to take, direct action. Recognising the necessity for widespread direct action as part of the fight against fracking, the Mobiliser Tour has set out to reach exactly this audience.

The Mobiliser events invoke historical instances from the Suffragettes to the US Civil Rights Movement. Those examples illustrate both that very few major positive social changes have occurred without the contribution of direct action, and that direct action is something undertaken not by some strange breed of ‘activists’, but by regular ‘everyday’ people taking it upon themselves to step forward and create change. We aim to demystify direct action – and not to elevate it above other forms of campaigning and change making, but to affirm its place as one significant tool and tactic within a range of valuable approaches.

Maybe one of the most important messages of the events is that direct action includes roles for everyone, regardless of personal disposition, capacity or skillset. So many tasks are necessary to plan, prepare, support and execute an action, and many of them involve little or no personal frontline risk.

One of the fulfilling aspects of the tour is the chance to meet and talk with dedicated people working away in all corners of the country to turn the fracking tide. The feedback we receive suggests we are succeeding in inspiring people. But we too take masses of inspiration from those we meet, and leave each tour stop buoyed up. We are generally put up by the event hosts, who have already put in many hours of footslog in advance to publicise and organise the local aspects of the event.

Thursday finds us in Northwich, Cheshire. The participants here are so attentive to the material and activities we offer, it feels like one of those points where all the collective hard work that has gone into this tour really comes to fruition. Our final event of the week in Liverpool the following night, serves as the re-launch of a local anti-fracking group, in itself a positive note to end on. We finish the evening in the pub, celebrating the tour’s close tired and elated.

Working alongside committed, talented and fabulous people in the organisation and delivery of the tour has been one of its pleasures. Grassroots organising has its challenges, and packing tasks into the spaces between paid work and life’s other commitments can feel like holding down two full time jobs at times. But the personal commitment, care and generosity everyone brings are among the many rewards. The overriding sense I carry away with me from the tour, meanwhile, is profound respect for all of those across the country who are standing up and taking the fight to the frackers in countless dynamic and creative ways.