RELEASE. Something in the Water: Satirical adverts appear in bus stops around Leeds to protest fracking

Bus-stops in Leeds have been taken over by activists in a creative protest to raise awareness that thousands of gallons of fracking fluid could be headed for the city. The action is part of the national ‘Break the Chain’ fortnight of action by Reclaim the Power [1] which yesterday saw protesters suspended by swings above a quarry in Carnforth for 11 hours. [2]

Campaigners placed adverts, mimicking Yorkshire Water’s branding, in stops around the city overnight. The group have taken action on the concern that wastewater from potential fracking sites in Lancashire and Yorkshire could be heading to the city’s Knostrop treatment works, run by Yorkshire Water and FCC Environment. 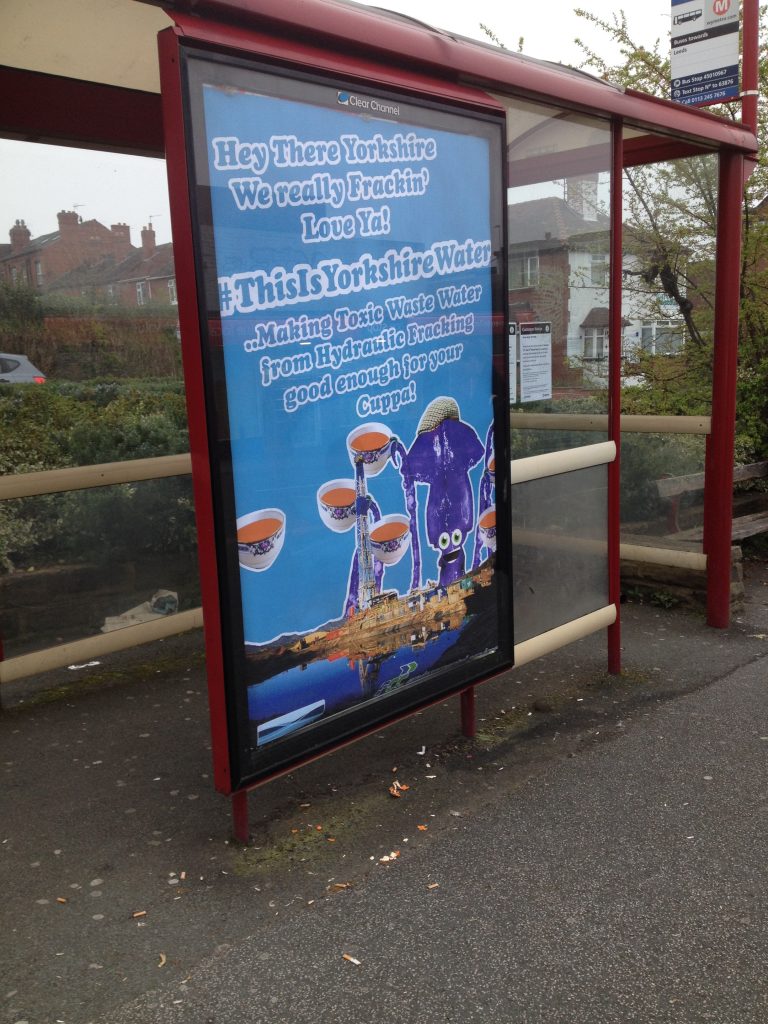 Correspondence between Lancashire County Council suggested that waste from Lancashire fracking sites could be heading to Leeds.[3] The Department of the Environment has also listed Knostrop as one of just 3 in England with permits that would allow for the treatment of liquid fracking waste.[4]

“Yorkshire Water’s most recent advertising campaign has refered to clean water as a ‘liquid birthright’ but we know this could be threatened if the Knostrop treatment works accepts fracking fluid. That’s why we decided to do some extra advertising for them and let people around Leeds know what could be on the way. There’s currently no fracking in the UK, and Yorkshire Water and FCC Environment can cut ties with the industry now before it gets started to help protect the people of Leeds and the global climate”.

This action follows on from a community campaign run by the Frack Free Leeds group against the proposal for the past year. Whilst the adverts created are satirical, the group hopes that the message will be taken seriously.

“We’re really concerned about the volume of toxic waste that could be heading our way. We’re worried about traffic implications and worried about possible contamination. We’ve been campaigning on this issue for months but we’re still not sure enough people are aware of the threat. We’ll be keeping up the dialogue over the coming months and hope this action by Reclaim the Power will help make more people in Leeds aware and encourage Yorkshire Water, FCC Environment and Leeds City Council to do the right thing and refuse to accept this water in our system”.

Local campaigners have been in conversation with the City Council and Yorkshire Water for a number of weeks over concerns that the site in Leeds will not be able to safely treat the fluid. They hope that any contracts or agreements to accept fracking waste into Leeds will be terminated. Discussions are still underway.

At least five companies in the fracking supply chain have already pulled out after public pressure [5]. Protests by locals have also been taking place every day at one of the proposed fracking sites in Lancashire, slowing and often halting Cuadrilla’s work to prepare the site for drilling [6]. Surveys have shown that public opposition to fracking is far higher than support, with just 18% supporting [7]. 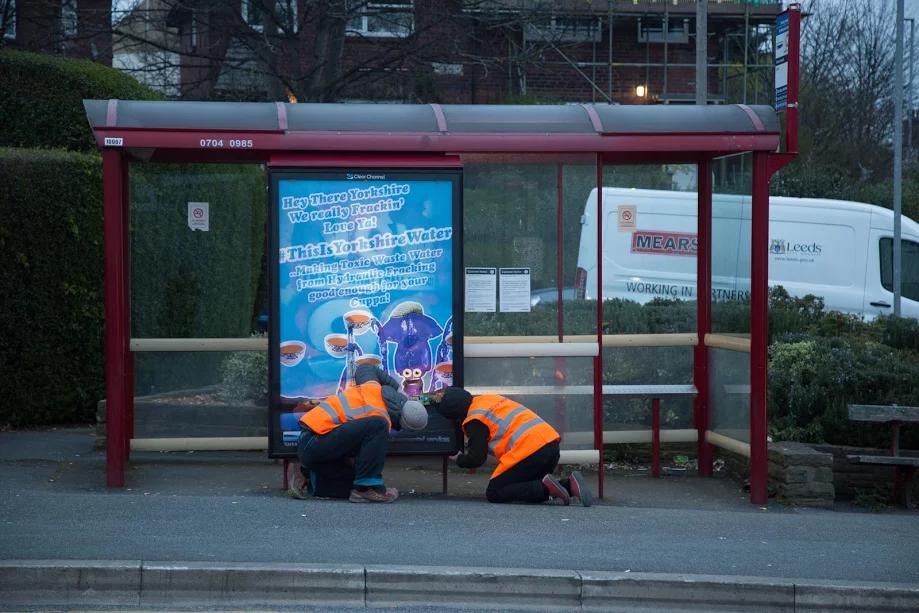