UPDATE:
Two arrests made at the Carnforth action — after 11 hours and closing the quarry for a full day, the two swing-blockaders have been arrested. More information to follow soon.

Anti-fracking activists from Bristol swung into action in Lancashire this morning with a blockade at Preston New Road fracking site suppliers Aggregate Industries. The blockade is the launch action of Break the Chain, a fortnight of interventions called by national social and climate justice group Reclaim the Power.[1] 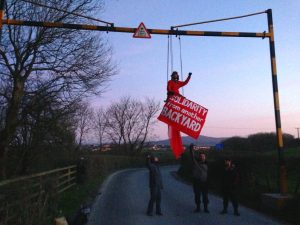 Lorry access to the company’s quarry in Carnforth has been entirely suspended by the appearance of two protesters on swings which were rigged onto height restriction bars at two key access points and are blocking all lorry movements. The police are on site.

Aggregate Industries is one of several companies supplying the controversial fracking site [Preston New Road] currently under construction outside Blackpool.  At least five companies are believed to have pulled out of further work at the site as a result of rising protests against their involvement.[2] 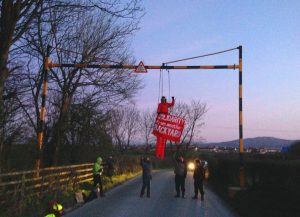 One of the protesters, Chris Thomson explained:

“We’re up here today because fracking isn’t a playground game. We need to give Aggregate Industries a reason to rethink its position, which is at odds with local democracy. Lancashire said no to fracking. Its imposition threatens local jobs and health and will have deadly impacts on those already facing the consequences of climate change in drought-hit East Africa and beyond.
“We’re asking Aggregate Industries to do the decent thing. Follow the example of other companies in the area. Step away from fracking your neighbours and we’ll gladly come down.”

They hope that the forthcoming protests will help expose the large network of industrial processes, from sand quarrying to toxic water dumping, which will expand if commercial scale fracking goes ahead. Reclaim the Power is also hoping to support momentum for a national grassroots response to fracking plans in 2017.

“Fracking is currently threatening Bristol and we won’t be able to defeat it alone, but we also know we won’t have to.  The people of the Fylde and Bolton have shown the way. Solidarity is growing as fast as the industry’s expansion plans. Which is fortunate, because it’s going to take all of our care and creative plotting to stop this. Day after day, all over the country, we need to get in the way. Get your friends together and get in.”

The activists are part of Bristol Rising Tide, the group who occupied the first fracking rig for 11 hours in December 2011. The rig was responsible for the only test frack to be carried out in the UK to date, and resulted in an earthquake which caused a temporary moratorium to be placed on the technology.

The south west is currently facing a new round of licensing threats, including one at Weston Super Mare, just up the road from Bristol. Bristol activists also plan to demonstrate outside a branch of fracking funder Barclays later in the week.