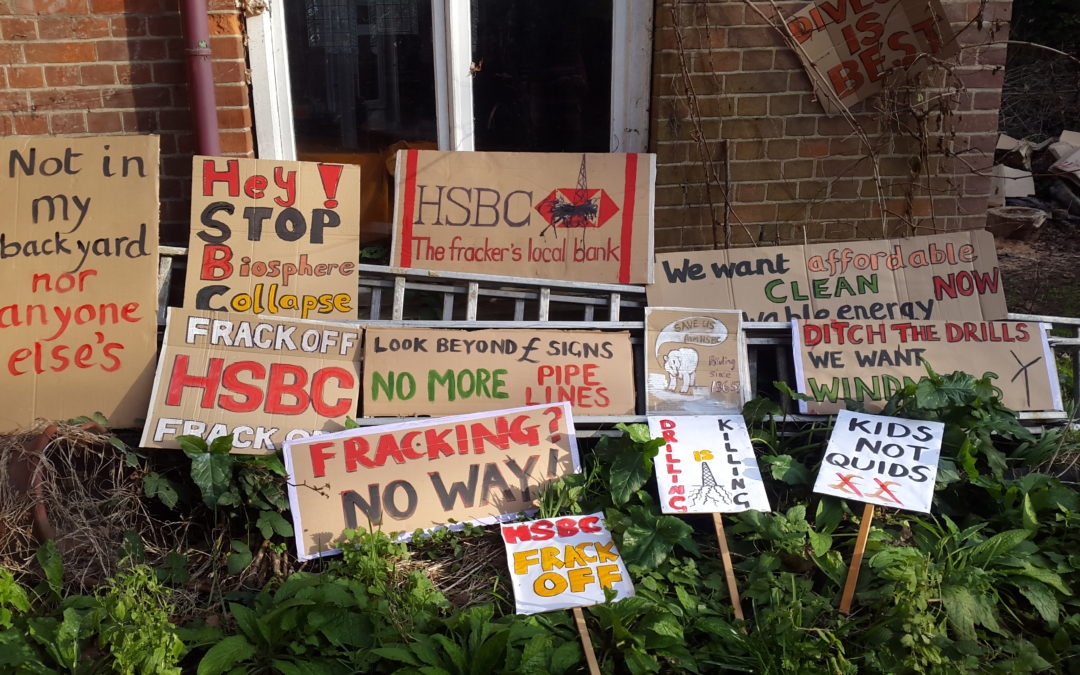 As part of RtP’s Supply and Demand actions targeting the fracking supply chain and new gas infrastructure, Cambridge activists decided to hold a family friendly picnic at HSBC on Friday, 22nd February. As one of the world’s largest financiers of the fossil fuel industry, HSBC recently doubled its shares in fracking company Igas and continues to finance coal and gas projects in areas where some of the world’s poorest are being hardest hit by climate breakdown.

One parent explained that she was there because she’s “been on a few Extinction Rebellion protests, but large crowds can be intimidating for young children. It doesn’t feel right to simply leave them at home though – the issues are too important and will affect their lives directly. I think it’s critical to educate children about the reality of where we’re at, and demonstrate that there are things you can do, even if it means breaking the rules when they aren’t right. I’m from a Jewish background so it’s part of our heritage to think about what to do if society goes wrong, and I think society is going very, very wrong at the moment.”

Some of us were very nervous about the event and how our children would respond, but in reality it was incredibly fun and enjoyable. Rachel, 5, adored the cleaning ladies in drag who were going around trying to clean up all the dirty money! It was a light-hearted event though the reality is, of course, very serious.

Children easily understand the environmental crisis, yet we tend to shelter them from the truths about the forces behind it: the global corporations and the elites who are willing to sacrifice anything in pursuit of power and money. But children need to see us acting with integrity, courage and solidarity. They need to see us working with others, and using our creativity to tell the truth.

They need to see us choosing hope, even when it seems like there’s nothing to be done. Otherwise, how can we encourage them to pursue their dreams? Jasper, 6, clearly understood why he was there when he presented the beautifully coloured in picture of sustainable energy sources to the Bank Manager.

As Francesca said, “I want my kids to look back and know that I was trying to do something about the catastrophe which is unfolding right before my eyes.”