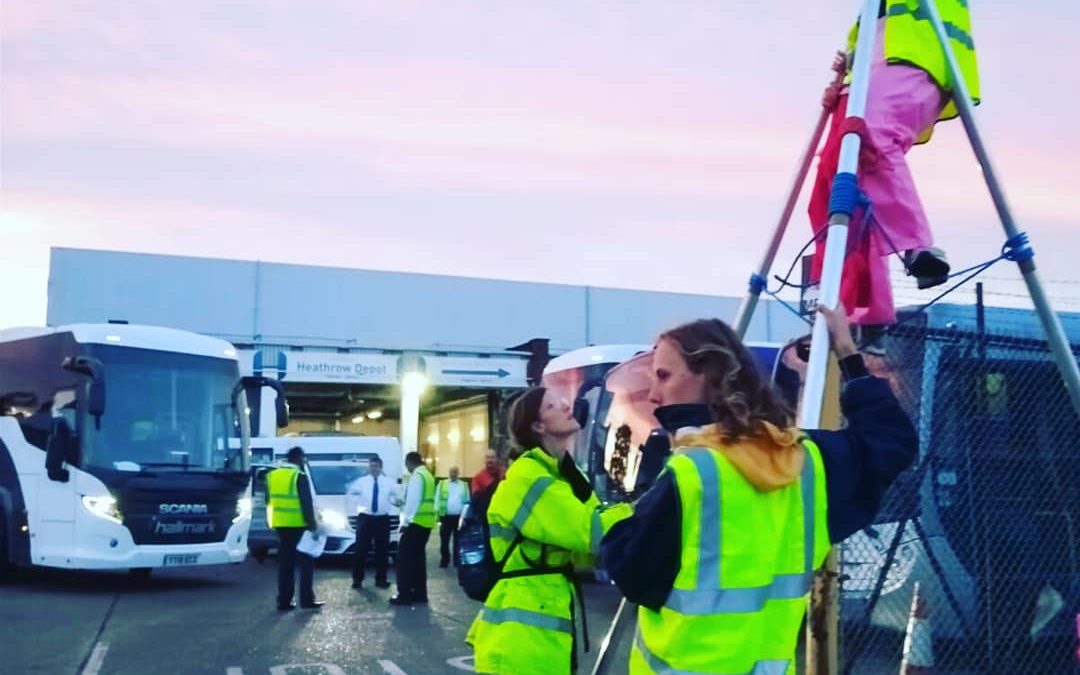 Stanwell, London – Protesters from direct action network Reclaim the Power [1] have blocked the entrance of coach company Hallmark Connections demanding they stop enabling government deportations – where people of the same nationality are rounded up and shipped out of the UK in secret.

Three protesters have suspended themselves from three-metre tripods constructed using scaffolding poles to block access to the site of Hallmark Connections. The company is contracted by the Home Office to transport people to airports where they are forcibly removed to countries where their lives may be in danger. Many people are deported before their claims to remain in the UK are heard by officials. Protesters say they will stay in position until the company agrees to end its involvement in deporting migrants.

Lucille from the All African Womens’ Group, a self-help group of women asylum seekers and immigrants, many of whom have been detained in Yarl’s Wood said:

“As women, we suffer particularly from the hostile environment because we are poorer to begin with, are often traumatised from rape and other violence and because we are often mothers with responsibility for other precious human beings. We face a sexist, racist Home Office and companies that profit from deportation. We all have a right to be here and to be treated with respect. We demand an end to the hostile environment, to detention, destitution and deportations and an end to the separation of families.”

A spokesperson from Reclaim the Power said:

“With this action, we’re standing with the our migrant friends and neighbours who have been fighting the Hostile Environment for years and continue to be on the sharpest edge of these cruel and unfair policies.”

“We call on Hallmark Connections and all other companies profiting from the deportations of migrants and asylum seekers to cancel their contracts with the Home Office. It is time to stop enabling the government’s brutal, racist Hostile Environment.”

The action comes hours before hundreds dressed in bright pink are expected to hold a vibrant demonstration in central London against the government’s racist immigration policy. The campaigners are putting new Home Secretary Priti Patel ‘on notice’ to end the ‘Hostile Environment’ or face escalating action in October. [2]

Both events are part of Power Beyond Borders, a mass direct action camp targeting both the Hostile Environment and the energy company Drax’s plans for a new gas power plant where 600 have gathered just outside London. This action also follows several other protests targeting companies involved in the process of deportations, such as British Airways who run chartered deportation flights. [3]

[1] Reclaim the Power is a direct action network campaigning for social and environmental justice.