THIS IS WHERE THE REAL ACTION IS. Online action hub launched

Well whoopee do. In the 4 months since the Paris climate agreements our government has managed one signature, while each week, regressive policies erode our welfare state, discriminate against our working classes and minorities and plunge our climate further into catastrophe. But at least they’ve put their signature to something right?…..even if the Paris climate deal will not ensure we avoid runaway climate chaos anyway.

Last Month our government started the process towards ratification of the Paris climate deal. The combined commitment from all the countries that have signed the deal is not enough to limit global temperature rise to below the crucial 2°C. 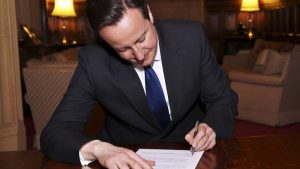 Another politician signing another climate deal

Something needs to be done. If our government won’t take action – we must. That’s why:

Two weeks ago 300 of us took action to shut down the Ffos-y-Fran mine. It was the biggest ever mass trespass in a UK open cast coal mine. And no-one was arrested. It was beautiful – take a look at all the amazing photos and videos from the weekend – seriously – they have to be seen to be believed.

It was effective – we actually halted mine operations – that deserves a mention. And just two days before the Welsh elections, we were top story in nearly every Welsh paper and TV channel, as well as some UK ones. Check out this Storify of all the media coverage we got for a taster.

Coal mined shut down for the day in Wales

Last weekend 4000 people shut down a massive lignite coal mine in East Germany as part of an action called Ende Geleande. Check out the awesome video’s here https://www.ende-gelaende.org/en/ 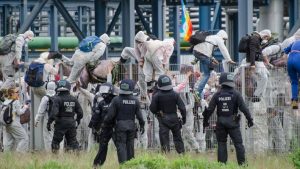 This week Reclaim the Power launched Groundswell – an online platform where activists across the country can securely upload accounts of actions they’ve taken. Sharing photos, stories and successes so the actions and growth of the movement doesn’t just stop here.

The website is designed to encourage others to take action, to build solidarity and show that whatever our struggles for justice, be it economic, environmental or social – we’re in it together.

With activist groups like Art not Oil, Plane Stupid, Brandalism and Blackpool Nanas involved there’s been loads going on already.

The year kicked off with a blockade of Carrington gas power station near Manchester where activists drew attention to a renewed dash for gas.

In February anti-nuclear campaigners protested outside EDF’s offices against the Hinkley C nuclear site in Somerset. They scaled walls with ladders and blockaded the front doors – drawing attention to the widespread opposition to Hinkley C.

Brandalism have continued their rebellion against the corporate take-over of our public spaces with more art works in March. This time posters asked employees of London’s major ad-agencies to consider their moral responsibilities, and join Brandalism.

Three performers from theatrical campaign group BP or not BP? took to the stage in April at Cadogan Hall to challenge BP’s sponsorship, just before Russia’s Mariinsky Orchestra was due to begin a performance of Romeo and Juliet. Invitees included VIPs from BP, the Department for Culture, Media and Sport, and the Russian Embassy, who gathered for a BP-hosted reception beforehand. The action received a massive round of applause from the audience.

But we need more people to take action all over the country if we really want to win this battle. So if you’re brand new to activism or part of an existing group, if you’re planning to take action, would like support or training or simply ideas for actions, get in touch at info@reclaimthepower.org.uk. Importantly, if you plan to take action, or already have – upload your story to the Groundswell website. There are more details on how it all works and security considerations on the site.

As the government takes further steps to repress our civil liberties, pit us against one-another while destroying our natural world, so we will draw strength from each other and find ever more ingenious ways to resist. Be part of making it happen you’re needed now more than ever.