On Friday 24 June 2016 a dedicated community campaigner and grandmother from Lancashire will appear in Blackpool County Court, and is expected to answer why she has not yet paid costs of over £55,000 to fracking firm Cuadrilla, a company with an appalling record of environmental destruction and health and safety disasters, including causing 2 earthquakes in 2011. Such is our ‘justice’ system.

The case relates to a 3 week community protection camp held in August 2014 by a group of 26 mothers and grandmothers from Lancashire, calling themselves ‘the Nanas’. They occupied a field on Preston New Road, near Blackpool, Lancashire using a ‘section 6’ notice (which squatters commonly use). The Nanas did this because of the threat fracking poses to their children’s health, and the threat to their community. They also wanted to raise awareness of the dangers of fracking and the camp became a community hub attended by many people.

The Nanas had communicated with the police and landowners, who were aware that the camp was to last 3 weeks. True to their word, the nanas left the field on 26 August 2014, leaving the field in a clean and tidy state. Vindictively, and in order to shut down opposition to their fracking plans, Cuadrilla then (through the landowners), staged a fake ‘eviction’ on 27 August 2014, and the Nanas were in court on 28 August 2014. Overwhelmed by the confusing and deliberately intimidating legal process, Tina decided to come forward to be a named defendant on behalf of the Nanas, after lawyers suggested that if no-one became a named defendant proceedings would continue without their involvement, and possibly people would be implicated using video evidence Cuadrilla has collected. Cuadrilla is funding the litigation by the landowners against Tina.

Nothing much happened from October 2014 when Tina was ordered to pay costs of £55,000 until May 2016 when Tina was approached when she was with her granddaughter by a stranger claiming to be acting for global corporate firm Eversheds. Tina was approached on another occasion by a man wearing a stab vest. Alison Oldfield, a partner at Eversheds who acts for fracking companies, states on her profile that she advises clients ‘crisis managing disruption caused by campaigners and protestors’. It is important to recognise the role of law and lawyers in assisting companies to assault our communities, degrade our local environment and accelerate climate change. They also take a leading role in persecuting people who defend their communities from corporate assaults. Law firms like Eversheds are important suppliers to Cuadrilla and should be considered targets for actions.

“This industry along with a compliant/complicit government, has shared misleading reports, misled communities and lied about benefits versus risks and yet I find myself marked as a criminal…

I am honoured by the support but know that this is not about anyone ‘being me’ – but about me being representative of others who stand with the same determination to stop this industry before it harms us.

I don’t know what happens next but do know that as I am protecting my young… I will not be stopped because this is an obligation, not a choice.”

Tina is in Blackpool County Court at 10am on Friday, please join her for the solidarity demo outside the court at 9am 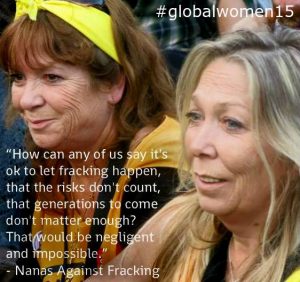