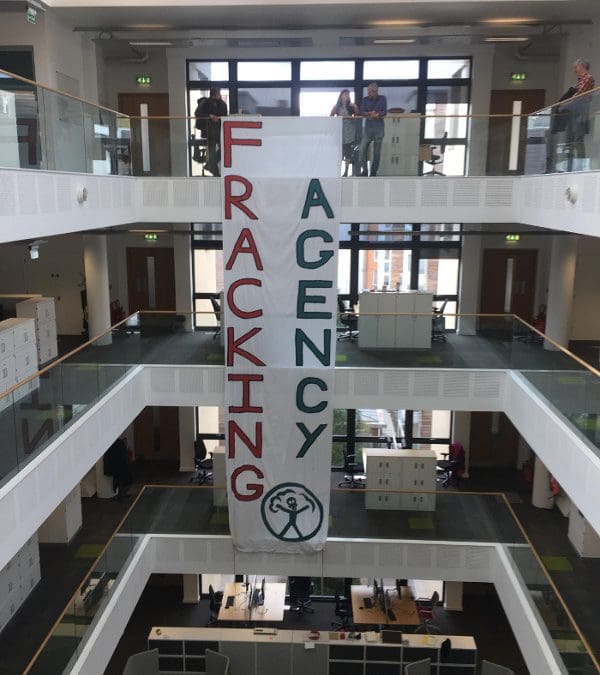 Climate activists from Bristol Rising Tide dropped a 9 metre banner from the atrium of the Environment Agency today in a protest against the body’s facilitation of the fracking industry.

“On the one hand, the Environment Agency is preparing the country for adapting to the impacts of climate change, but on the other, it is dishing out permits for onshore oil and gas drilling which will exacerbate the climate crisis.”
“We call on the Environment Agency and its workers to take a tougher stance against a reckless fracking industry which threatens our air quality, our water quality and our climate.”

The activists highlighted how the Forestry Commission – another agency tied to the Department for Environment, Food and Rural Affairs (Defra) – recently advised that drilling at Leith Hill in Surrey be discontinued due to environmental concerns of damage to nearby woodland. Their lease on the land wasn’t renewed, with a Defra spokesperson saying: “The nation’s woods and forests are cherished natural assets and we want to ensure they are protected now and into the future.”

Laurie Underwood continued:
“The Environment Agency should be more pro-active in speaking out against the environmental impacts of new, unwanted fossil fuel extraction. They should follow the Forestry Commission’s lead and tell the government that licensing fracking isn’t compatible with its environmental mission. Stop the fracking permits. Stop approving climate change” 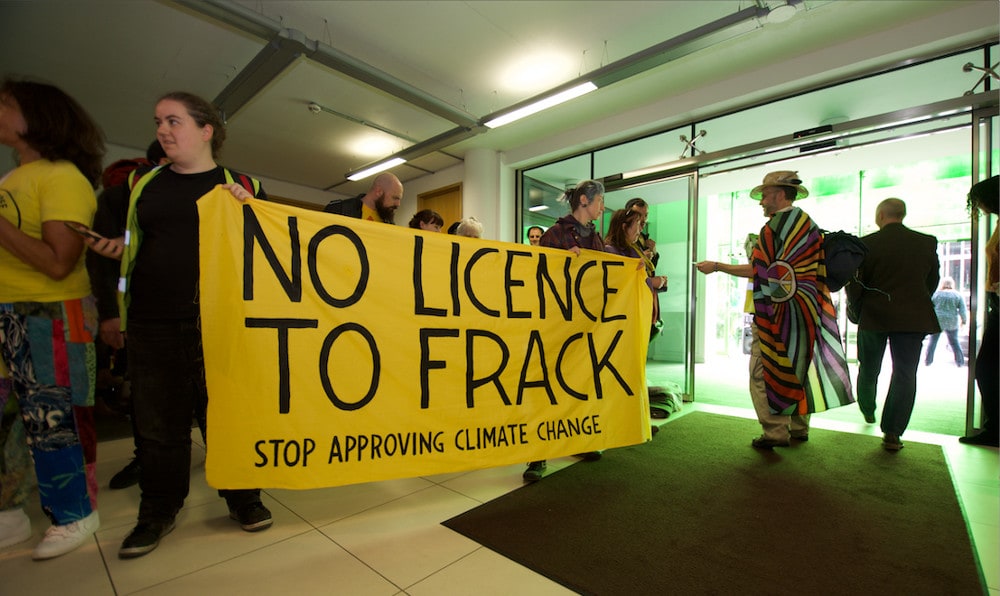 Purpose of the Environment Agency

The Environment Agency is central to countering climate change in the UK. It manages flooding, coastal erosion and other climate impacts. At the same time it grants licenses to oil and gas sites across the UK. In the last three years it has granted licenses to Cuadrilla at Preston New Road in Lancashire, to Third Energy at Kirby Misperton in North Yorkshire and to other oil and gas sites near Grimsby, Scunthorpe, the Weald, Immingham and Winchester. We call on the Environment Agency to make good its responsibilities to act on climate change by resisting oil and gas extraction across the UK.
Recent examples of permits issued under the Industrial Emissions Directive
13/1/16 DN41 8BQ Grimsby. Company: Europa
22/5/17 DN15 0NB Scunthorpe. Company: Egdon
7/7/17 RH14 9ED Billingshurst. Company: Kimmeridge
21/7/17 TS23 1QY Billingham. Company: SNF
4/5/18 DN15 0RA Scunthorpe. Company: Europa
18/6/18 LE14 9NR Melton Mobray. Company: Island