Today, we were sentenced to pay £10,000 compensation charges to Miller Argent Ltd, after pleading guilty to aggravated trespass by shutting down Ffos-y-fran coal mine for one day. If you want to help us pay these fines, click here.

In the early hours of 21st April 2017, under the banner of Earth First! and Reclaim the Power, our group of five blockaded the UK’s largest opencast coal mine to disrupt the ecologically and socially disastrous mining operations of Miller Argent (South Wales) Ltd. 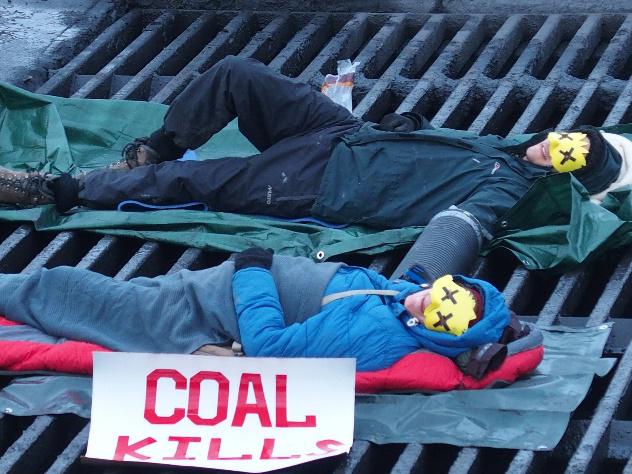 At 5am, two of us blocked all vehicle access to the mine by using D-locks and an armtube to lock onto the cattle grids at the entrance gate. Before long, on-site security became aware of our presence and called the police. Meanwhile, three of us hiked over the surrounding common land and the edge of the mine – sneaking past cows and security personnel. We climbed down towards the bottom of the vast hole that Miller Argent’s operations have ripped into the earth to find their 300 tonne hydraulic excavators. These are used to extract coal from the mine – five million tonnes of coal have already been extracted from Ffos-y-fran, with another six million to go – fifteen to sixteen hours a day. Following a little exploration of the excavator, we used D-locks to attach ourselves to the machine, got books, earphones, sleeping bags and sandwiches out and prepared for a long day in the pit. We were locked on for a total of 10 and a half hours, shutting down all coal mining and transport of coal off the site. After having been cut out, we were arrested for aggravated trespass, disruption of lawful activity and intimidation of mining personnel.

Perhaps the most intimidating of us all was one who was dressed as a bright yellow canary. Historically, canaries were brought down into underground mines to act as warning signals: the death of the little bird indicated toxic levels of gas and told miners to get out of the pit. Similarly, we wanted to highlight the threat that mining poses to neighbouring communities and the global climate – coal mining is causing irreversible damage, particularly to those least responsible, especially in the global South. That’s why the climate crisis is a racist crisis.

However, coal mining is not only a global issue. It’s also an issue of local air pollution, lack of democracy, accountability and environmental justice. For over a decade, campaigners from Residents Against Ffos-y-fran and the United Valleys Action Group have been fighting the mine. With the mine only 37 metres from the closest homes in Merthyr Tydfil, they are suffering from pollution, dust, noise and vibration every day. In March this year, the UN Special Rapporteur On Human Rights & Toxics called for a health inquiry into cancer and asthma rates in the communities neighbouring Ffos-y-fran, criticising the lack of government response to local complaints. Five hundred local residents have attempted to take court action against the mine, but their application was refused by the High Court as they were deemed unable to afford it. 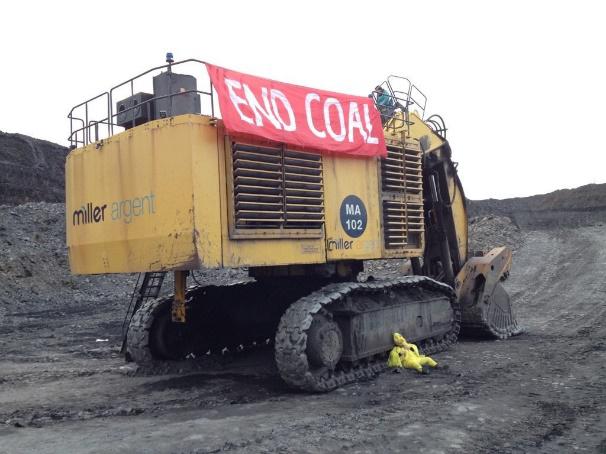 Ffos-y-fran illustrates the failures of environmental regulation in the UK, the dominance of corporate over human interests, and the injustices associated with the system. As local communities continue to suffer, and as we approach runaway climate change, Miller Argent continue their mining at Ffos-y-fran, causing ecological destruction and health impacts under the name of “land reclamation”. In fact, the company is trying to expand its operations and has applied for a permit to open a second mine nearby, which would lead to the destruction of highly biodiverse and unique habitat – supposed to be “offset” elsewhere (as if the destruction of nature could easily be compensated for with the protection of nature elsewhere). Currently, the company is appealing against the council rejection of their proposal. The ongoing ecological and social destruction at Ffos-y-fran mine shows the failure of the current political economic system to deal with the multiple social and ecological crises, and illustrates its structural dependence on fossil fuel extraction.

Corporate fossil fuel interests have become institutionalised as state interests, to be defended at all costs through collaboration between private security personnel, corporations, state forces and police who suppress, co-opt and intimidate resistance. The court’s willingness to deter protesters on behalf of Miller Argent by imposing these ridiculously high compensation payments has exemplified this today.  The system is based on and has entrenched our addiction to fossil fuels to the extent that we cannot envision a different system. In fact, some have argued, it is easier to imagine the end of the world than the end of fossil capitalism.

Until recently, Ffos-y-fran mine supplied coal to one of Europe’s dirtiest and most toxic power stations, Aberthaw, the third largest emitter of nitrogen oxides in the EU and responsible for 17% of Wales’ greenhouse gas emissions. In 2014, the European Court of Justice confirmed that the power station has been in breach of EU air pollution regulation since 2008. Yet, rather than shutting the plant down once and for all, the government is actually paying the operator, RWE nPower, some £27 million pounds to keep it operational. Recently, the power station stopped burning Welsh coal, instead relying on imported coal (most likely from Russia and Colombia where social and environmental mining impacts are even worse). Ffos-y-fran continues to operate, however, supplying other industries – RWE nPower could resort back to its coal any day, and we have no reason to believe that they won’t.

Whilst David Cameron’s government committed to phasing out coal by 2025, this is not soon enough for the communities around Ffos-y-fran, nor is it soon enough for the many people who are already suffering from climate change, and the many more who will in the future. And with Brexit, the reality of this commitment is cast into doubt, especially given Theresa May’s legacy of conducting u-turns in many important policy areas and the commitment to leaving the jurisdiction of the European Court of Justice.

Over and over again, governments have shown that they cannot be trusted to deal with the multiple social and ecological crises we are facing; they are part of the problem, not the solution. Their responses have been driven by corporate interests, further entrenching and institutionalising inequalities and injustices through racist border policies, false solutions and green capitalist fantasies of never ending economic growth, market solutions and private property. The ongoing monetary valuation and commodification of nature is justified by the need to ‘make nature pay for its own protection,’ or ‘selling nature to save it’ and based on the construction of nature as ‘ecosystem services’ or ‘natural capital,’ effectively turning it into a global currency to be traded on markets. This approach only thinly veils the ongoing and intensifying destruction of our planet and the deepening of global and local inequalities along axes of race, gender and many others. Twenty-five years of climate negotiations have laid bare the corporate capture of the international policy processes and exposed the need to take matters into our own hands – to go to where climate change is caused, to reclaim power and to “shut shit down”. The global coal industry is at the forefront of climate change, of biodiversity loss, exploitation and degradation of social and ecological communities. 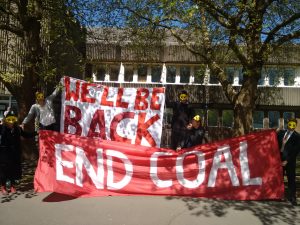 We need a diversity of tactics and strategies to end coal. In resistance to Ffos-y-fran, local people have fought numerous court battles and a public inquiry, and organised petitions and protests over the last decade, succeeding in having a second mine rejected. By disrupting operations and shutting down the mine, we hit the mine operator where it hurts most – in the first two hours of the blockade alone, we have been told, the company allegedly lost £33,000. Only through continued direct action, and by opposing all types of destruction, authority and oppression can we start to build the world we want to see. Centralising power structures and authority are inherently environmentally exploitative and socially oppressive. We want a socio-economic system run for the needs of people, not for profit; and according to the principles of solidarity, co-operation and mutual aid, not competitiveness. This system is based on sharing, voluntary collaboration, and communal organising and runs on local, decentralised, communally controlled electricity. That’s the world we are fighting for.

If you support our action and can help us pay for these ludicrous charges in any way, please donate here.

For those who came before, and those who will come after!

A shorter version of this blogpost has been published in the Huffington Post. 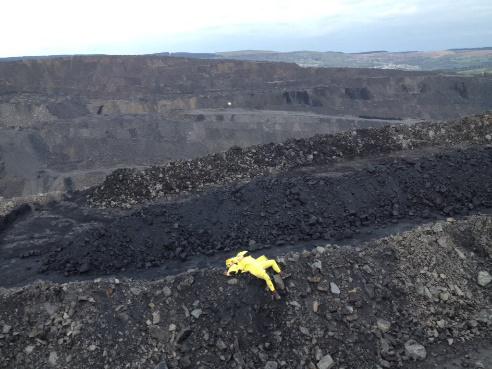