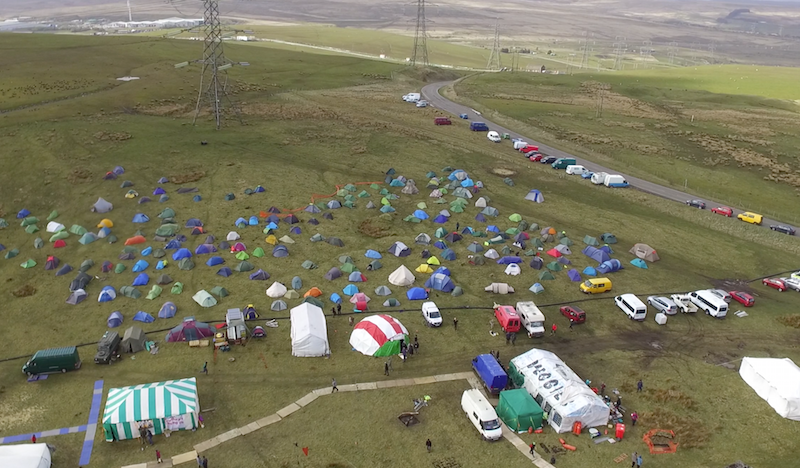 Blog by Jopsyhenia Econimeade on the ground at End Coal Now 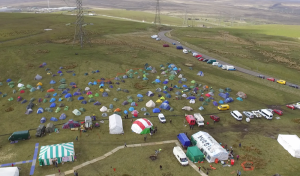 An aerial view of our camp.

At the Hammersmith Apollo, I apprehensively ascended the stairs of a big gold bus brimming with activists, bound for beautiful Wales. Our mission, managed by the grassroots direct action network Reclaim the Power, is a mass action to protest the pugnacious processes of Miller Argent. The mining company operates the UK’s largest open cast coal mine, Ffos-yfran, and is threatening to open another huge mine just seconds down the road.

Despite fierce local opposition, and the unanimous rejection of Nant Llesg by the council last year, the coal corporation is contesting the decision, taking the appeal over the heads of the community and local authority. The proposed 6-million-tonne coal mine, on legal common land just meters down the road would be a disastrous and destructive development in direct defiance to democracy.

Ffos-y-fran, the largest open cast coal mine in the UK, is a huge open wound on the wonderful Welsh moors where 11 million tonnes of coal are due to be extracted. Whilst mining was the livelihood for communities in Wales, opencast is a whole other kettle of fish. We now know that mitigating climate change is of the upmost importance, and we know we must keep 80% of known fossil fuels reserves in the ground to avoid the most devastating effects of climate change for people all over the world.

There are dire consequences associated with the fossil fuel industry for workers and their families living on the front lines – displacement, air pollution, ensuing health problems, biodiversity loss, environmental degradation and noise pollution – all of which endanger their way of life.

And while the mines provided security for workers and their families in generations past, the situation has changed. Where miners once rallied to protect their rights to provide for their families by piling up coal, community centres are now full with locals campaigning for an end to it. 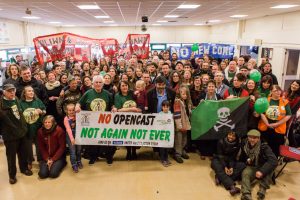 At Solidarity Sunday, I witnessed local residents, community members and councillors coming together to reject the mine that threatens their health, their air, and their community. I heard how local people endured explosive blasts and the movements of house-sized diggers and lorries only thirty metres from their home, sixteen hours a day, six days a week. Currently there are less than 200 jobs at Ffos-y-fran, and around 1,600 jobs in open-cast mining across the UK. Let’s compare this with 35,000 currently committed to the solar sector and a further 15,500 in wind.

Just over the monstrous mound of spoil heaps, vast man made mountains of fossil fuel extraction waste that warp the landscape, we are camped in our hundreds. The hordes of industrious activists are both humbling and inspiring. Many come with experiences of direct action from all around the world. And for those of us with less experience, we are motivated to know our movement is magnified by the amalgamation of a mass of amazing actions conducted across 13 coal intensive communities around the world.

In Germany, the Philippines, Australia, Indonesia, Turkey, Colombia, Canada and more – thousands are mobilising for this monumental Break Free 2016 to publicly oppose the ruinous reign of fossil fuel companies, who are misguided by a thirst for profits over people and planet. 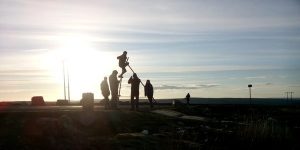 Workshops and meetings, lectures and films, performances and poetry all prepare and inspire the protestors for the action tomorrow. Vibrant from home cooked vegan meals, we engage heartily in team bonding and trust building exercises. The sort which in a normal office environment would invoke groans and grumbles, but here inspires nothing but beams and benevolence.

Fuelled by the wind turbine we erected on day one, the camp convenes people from all backgrounds across social, economic and environmental justice agendas, and connects the dots to fortify our movement against the business models of our failed capitalist society. We seek solutions for the benefit of many.