We need to honour Anna with action

This isn’t our usual sort of blogpost, but Anna is dead. This week a lot of the Bristol Reclaim the Power crew have been wandering round looking dazed, repeating quietly to themselves, Anna is dead. It seems so thoroughly unlikely.

You might have heard Anna’s dad on the radio, speaking with impossible dignity, patiently explaining his respect for her choice to take up arms in Afrin.

You might not have known that the freedom fighter he was speaking about was someone you’d have bumped into in the loo queue at Reclaim the Power’s Didcot camp. That she built treehouses on the metrobus route ‘Rising Up’ land occupation in Bristol, expertly teaching people knots. That she made entirely badass home-brew out of everything from hibiscus and rosehip to elderflower and rhubarb. 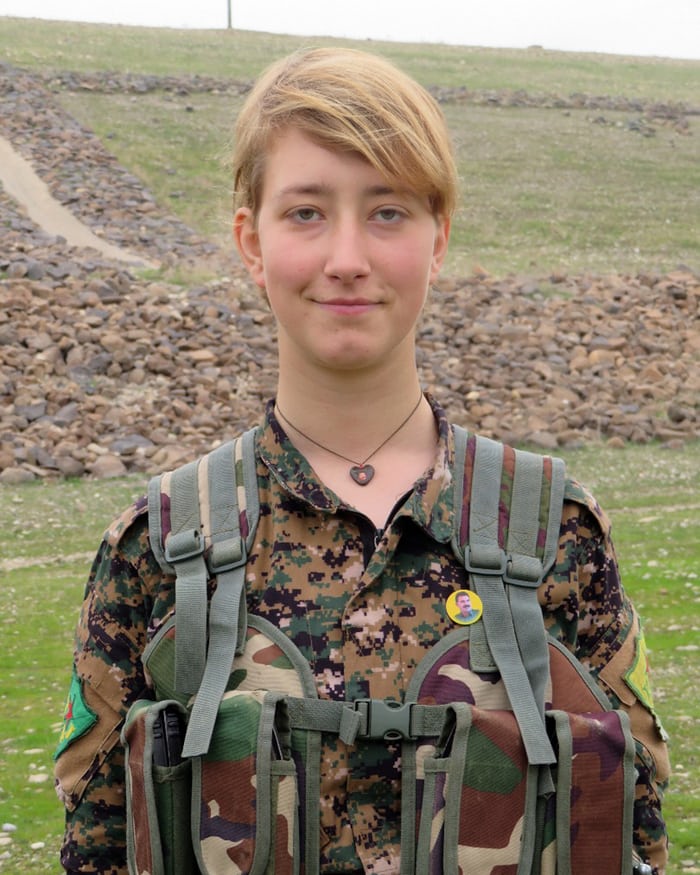 All of which was totally consistent with her desire to defend the remarkable experiment currently being enacted in Rojava – a space of Kurdish autonomy and direct democracy in the heart of the Syrian conflict. Rojava’s eco anarcho feminist uprising has not only been busy carving out equality in the face of imminent destruction, it has also pushed back the forces of ISIS. The all female YPJ units being a critical part of their success. The UK counted it as an ally when it was doing so.

Afrin held out against the fascist forces of ISIS only to be confronted by airstrikes from one of the UK’s allies in NATO – Turkey.

The very plane that bombed Anna and the two Kurdish women who fell with her may well have been made in Bristol. Sold under perfectly legal export licenses. Traveling hundreds of miles to rain missiles on a convoy of fleeing citizens. People, her comrade tells us, her unit had won extra time for.

Now Turkey looks set to try and seize the land so painfully won by the YPG and YPJ. To crush with ISIS-like brutality something truly beautiful. How do I know that what Rojava has made is worth it? I’ve never been. But I knew Anna, and she took no shit. Her analysis was always rigorous and uncompromising. And she knew better than most that life is imperfect, but that some things are worth fighting for.

Yesterday I found her memorial video. It’s delivered in English in as if for non native speakers. It’s both alien, and absolutely her. This is some of what she said:

“The revolution happening in Kurdistan right now is part of our revolution and part of our search. Our search for what could be possible means accepting being part of a rich heritage. The women of the Paris Commune of 1871 and the workers’ militias of the Hamburg uprising, that’s us. The comrades of the October revolution and the Spanish Civil War, that’s us. The workers on strike in India and the guerilla in the mountains of Kurdistan, that’s us. We are the anarchists of Greece, we are squatters. We are the witches and the farmers of the early modern period…

If we want to be victorious we have to admit that our fight today is a fight for all or nothing. It is a time of bravery and decisions, of co-ordination and organisation. It is the time of action.”

As I write, Turkish forces are threatening to keep going further into Rojava. To destroy a blueprint for revolution that has never been more critical. One where soil ecology and sustainable energy sit side by side with confronting patriarchy and dismantling privilege.

It’s been reported that Anna’s senior commanders tried to dissuade her from her final front line. That many internationals find their communications skills being valued more highly than their military ones.

From the comfort of our small island we have leverage. There may be very little time left to stop Turkey in its tracks. At the moment western governments are intent on turning a blind eye to Afrin and the situation in Rojava, but this could change. The French and Greek governments have started to make noises of dissent and in recent weeks there have been demos across the world. In London Anna’s family headed a march demanding a ceasefire to enable the return of her body (#BringAnnaHome). In Bristol they blocked roads. In Manchester they blocked train tracks.

I don’t know what we do from here. But I do know that there are Kurdish solidarity groups up and down the country looking for support. I know that we owe it Anna and the people she fought with to listen. That in however small a way, now is a time for coordination and organisation. A time for action.