Family-friendly carnival at Preston New Road fracking draws hundreds to Lancashire from across the UK as Cuadrilla claim drill has entered site. 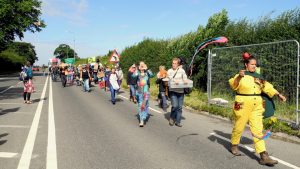 Lancashire, UK — Over two hundred people have rallied at the Preston New Road fracking site for a mass demonstration as the finale of the ‘Rolling Resistance’ month of heightened anti-fracking action.

The family-friendly ‘Carnival for a Frack Free Future’ is ongoing, featuring circus performers, live music, children’s activities, and speeches from environmental groups the UK Youth Climate Coalition (UKYCC) and Friends of the Earth Scotland, as well as local campaigners and children.

CONTACT: To arrange visiting the site, photo and video, and interviews: press@reclaimthepower.org.uk, 07404016676

Coralie Datta, an organiser of Friday’s demo from Reclaim the Power, commented:

“Over the past month, hundreds of people have travelled from across the UK to stand side by side with Lancashire residents and resist fracking being forced on a local community that said no. We’re here today to celebrate the strength, creativity and diversity of the people standing up to this reckless and undemocratic industry.

“Although we’re coming to the end of an incredible month of action, the fight against fracking goes on. People from across the country will continue to support the inspiring community resistance here in Lancashire, and show the government and industry that we won’t allow fracking; not here, not anywhere.”

“Yesterday Cuadrilla claim to have moved a drill rig onto site at Preston New Road. But while they congratulate themselves, we won’t be distracted by today’s news, and it will only strengthen everybody’s resolve to keep fighting.

“Despite Cuadrilla’s smug assurances, fracking is an industry doomed to fail – with investors losing confidence and public opposition at an all time high. The fact that they felt the need to break their very clear planning conditions in order to sneak this equipment into site in the dead of night clearly shows this.

“Cuadrilla have been trying to frack in Lancashire for years but thanks to the strength of the local community they have been stopped at every turn. We will continue to take action and prevent such a reckless and undemocratic industry getting a foothold.”