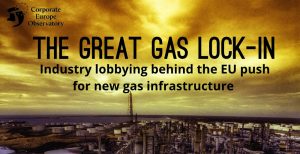 The EU and its governments want to build a new generation of pipelines and gas infrastructure, rather than focus on renewable energy and reducing demand.

Heavy lobbying from the gas industry could see us locked into fossil fuels for another 40-50 years. And far from being the clean energy that it is being sold to us as gas is just as bad for the climate as coal, if not worse. So called natural gas itself, when released into the atmosphere is a greenhouse gas, 100 times worse for the climate than carbon dioxide. The gas is released frequently during extraction and transportation.

In the last three years, the gas lobby has had 460 meetings with the two commissioners in charge of the EU commissioners for climate and energy, Miguel Arias Cañete, and Maroš Šef?ovi?. And its likely that they are lobbying for such mega projects like the Trans-Adriatic mega pipeline.

A new report by Corporate Europe Observatory exposes the power of the gas industry lobby in Brussels. The report exposes the tactics used and the role lobbying has played in the construction of new pipelines.

According to the research, the gas industry:

• spent over €100 million in 2016 and had more than 1000 lobbyists on its payroll. Some of the biggest spenders are well-known polluters such as Royal Dutch Shell and ExxonMobil, who each declared up to €4.75 million last year.

• secured one ninth of the meetings (51) with the two European Commissioners in charge of Climate and Energy policy in the last three years. 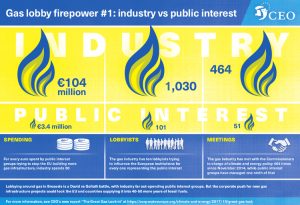 Natural gas is actually a disaster for nature, and communities. If we are serious about human rights and the climate, big gas needs to be kept out of the UN talks, out of Brussels and out of our governments.

Download the full report here. And a short video here.