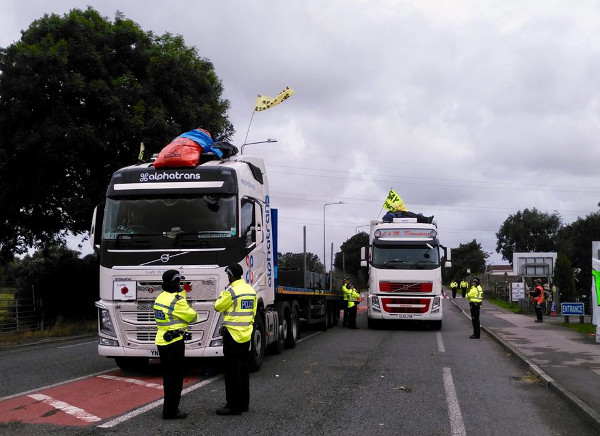 An account of defending myself in court – by Antoine

9th November 2017  The arrest was a silly one. We had managed to block eight lorries for a few days at Preston New Road fracking site in late July 2017 –  thanks to ‘truck surfers’ who had climbed on top of four of them.  I had spent two nights sleeping in front of one of the lorries that had a surfer on top.

On the morning of the second night, around 5am, a police officer woke me, told me that one of the surfers had come down and that they were going to move us. I asked if the surfer on top of my truck was still there. The answer was “yes”. I told her that I couldn’t see how they were going to move this truck in that case. They woke him to ask him to come down. He said he was going to stay, so I put my earplugs back and went to sleep. The Police Officer then asked if I was not going to move. I said “Well, this truck is not going to move, is it? So I’m staying.” Around 5.45am, she woke me again and arrested me without warning, as well as, Alec, who was sleeping next to me.

We had been arrested for public nuisance, but, at the police station, the charge was changed to obstruction of a police officer. They offered me a caution, “since you behaved well until now and have a clean record”, which I refused: Green & Black Cross had advised us never to accept a caution since it’s an admission of guilt, it stays on your record, and, often, the police offer that when they don’t have enough evidence against you.

Alec and I both pleaded not guilty of this charge. Ahead of our court hearing, the police added the charge of obstruction of the highway, for which we pleaded the same.  (I didn’t plead at the hearing myself. I had asked the court for permission to plead in absentia since I was living out of the country).

When I found out that I wouldn’t get legal aid, I decided to represent myself. I knew that Alec was eligible for legal aid and that I could adopt his defence. I got a bit stressed when I found out that his solicitor couldn’t get hold of him ahead of the hearing. I had no means of contacting him myself.  The solicitor didn’t know if he was going to turn up, and that she may not stay in court if he wasn’t there.  This meant that I may be on my own! I started to prepare for doing all the work myself – I had read Legal Defence & Monitring Group’s very good ‘How to defend yourself in court‘ guide.

Alec turned up on the day. We had another stressful moment when his solicitor told us that our case might be adjourned because the case before ours risked being very long. But we were lucky and we started around 12 noon (we had been summoned for 9.30am). We were called in to court.

The prosecutor introduced the case. She then called her witnesses. The first one was the Police Officer who had arrested me. The prosecutor showed the arrest video, then the Police Officer told the magistrates that I had obstructed her in that she had asked me to move several times and that, repeatedly, I had put my earplugs in my ears and gone back to sleep. After Alec’s solicitor had cross-examined her, the president of the court asked me if I had any questions for her. I had read that, in the cross-examination, we should challenge evidence we didn’t agree with. I didn’t really know how to do it since I couldn’t say “I don’t agree”, so I just insisted on the points I didn’t agree with, asking the policewoman if she really remembers that I put my earplugs back several times. Even though it wasn’t much, it felt really good to cross-examine the person who had arrested me and it helped boost my confidence.

Then the PO who had arrested Alec came. He didn’t seem very sure of what had happened anymore. I didn’t feel I needed to ask further questions after Alec’s solicitor. Both police officers said they had come back to the site after bringing us to the police station, but when Alec’s solicitor asked them if the truck was still there when they passed, neither of them could remember!

It was our turn to testify and get cross-examined. I think that this where the combination of only one of us being represented showed most powerful.

Alec got there first. His solicitor asked him first if he had been convicted of any crime before, to which he answered “no”. She probably couldn’t have asked this question had I been represented since I would have had to say “yes”.

Then I got up. Representing yourself has the huge advantage that you can speak freely –  but it means a lot more preparation: you need to remember all you want to say without notes. I mentioned my job, that I went up to Lancashire during my holidays, the other campaigns I had done against climate change, how I came to believe that we now need civil disobedience, the impacts of fracking, and then gave my version of what happened on that day. All along, I felt the magistrates listened very respectfully. The cross-examination was easy too – our solicitor had told us that the prosecutor was also against fracking and she didn’t seem that committed! It was very empowering to be able to speak up and to fight for my rights in court.

The wonderful Leigh was then called in as a witness. She was our legal observer and could testify that, 20 minutes before our arrest, the police had told her we were not at risk of arrest.

The prosecutor’s closing speech was, in summary, that we have a right to protest but that there are limitations to it and that it’s up to the magistrates to decide whether we exceeded those limitations (!). Alec’s solicitor made a wonderful closing speech. She argued that it was clear that we had not obstructed the police: from our testimonies, Alec would have moved had the police asked him to and I wanted to prevent the truck from moving while the surfer was on top for his safety. Moreover, the police video showed that we didn’t show any resistance when the police arrested us. Regarding obstruction of the highway, the evidence showed that the truck stayed there for another two days after we were removed, so we were not obstructing anything. Finally, she took the best from both our testimonies (Alec never being convicted before, me coming up from Switzerland showing my commitment, etc.) and used it for us both.

The magistrates withdrew to discuss. When they came back, the president summarised the evidence, what was disputed, what they had considered, etc. It felt like she enjoyed maintaining the suspense. Then, finally, she said: “regarding the charge obstruction of police officer, we found you not guilty”. And likewise for the second charge.

It was amazing and such a relief! Even though I had known, rationally, that there was a good chance we would be cleared of all charges, I didn’t believe, emotionally, that it was possible for the courts to speak against the police. I had also felt that the police had largely exaggerated the facts to try to prove their case and that made me sad. Still, I was energised and empowered. I just felt like going back to Preston New Road and keep fighting!