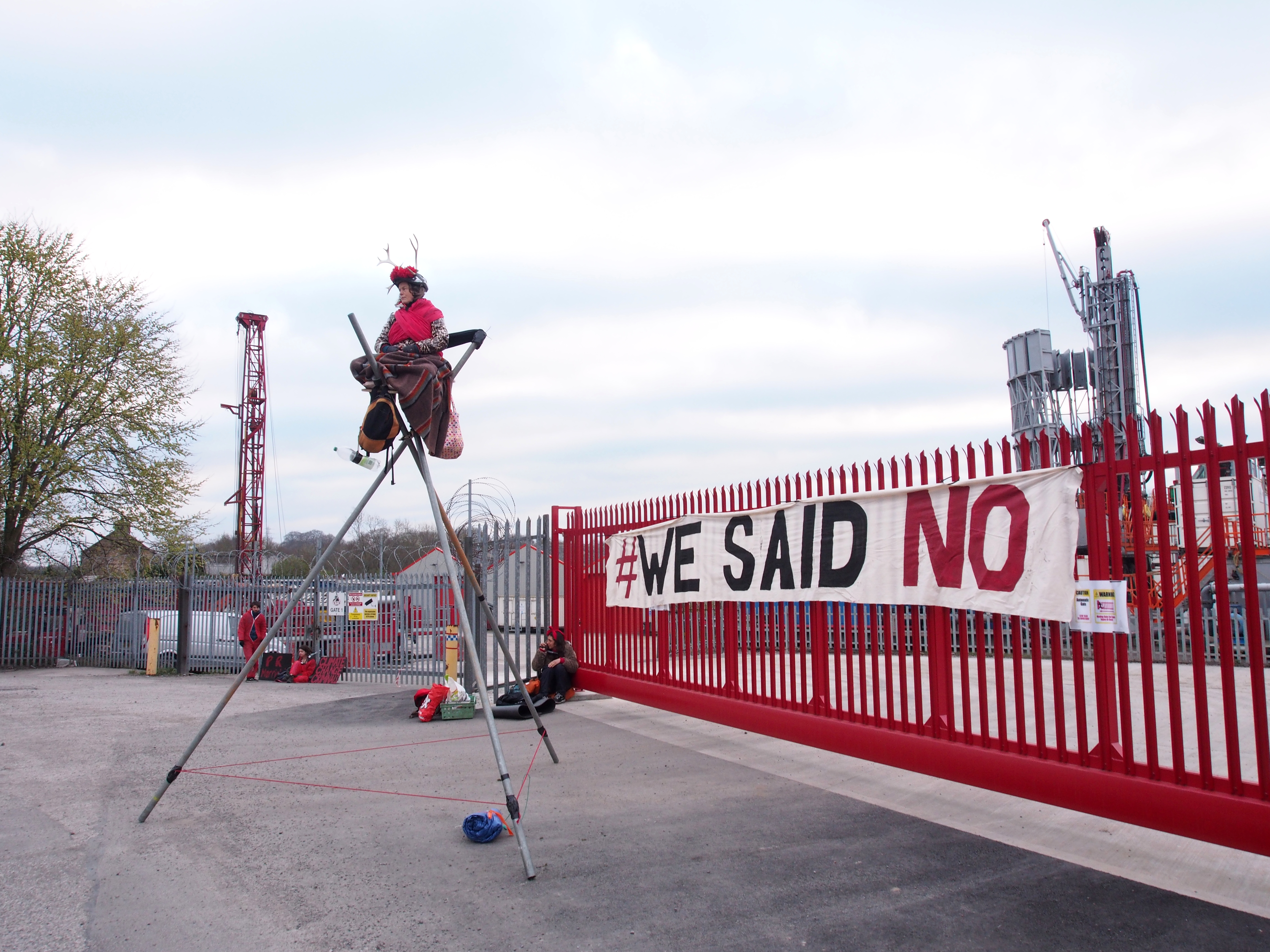 CHESTERFIELD, DERBYSHIRE — Today 12 people have shut down drilling company, PR Marriott, by blockading the entrance, with a banners dropped from the company’s drill rig and main gate. The anti-fracking activists targeted Marriott due to their links with fracking company, Cuadrilla, and their storage of the proposed fracking rig for use in Lancashire [1]. This action is one of many actions targeting companies tied to the fracking industry, as part of the national ‘Break the Chain’ fortnight of action by Reclaim the Power [2].

At 6.30am anti-frackers erected a scaffold tripod and locked themselves onto the gates, blockading the entrance to Marriott preventing traffic from leaving and entering the site. An activist also entered the site and scaled a fracking rig, dropping a banner which read “Fracking? Expect Us” and tied the equipment up with a symbolic red line. The drilling rig for use at the proposed Lancashire fracking site, Preston New Road, is expected to be delivered any day.

“We are here today in solidarity with anti- fracking protesters in Lancashire where Cuadrilla wants to drill 800 wells in the region alone. We’re asking Marriott to do the decent thing and step away from fracking before it devastates the region.”

PR Marriott is the largest onshore drilling company based in the United Kingdom. They have extremely close links to Cuadrilla Resources, the company trying to exploit shale oil and gas in Lancashire, though the company is also an old time player involved with the extraction of many other fossil fuels too. Marriott supplies Cuadrilla’s drilling equipment.

At least four companies in the fracking supply chain have already pulled out after public pressure [3]. Protests by locals have also been taking place every day at one of the proposed fracking sites in Lancashire, slowing and often halting Cuadrilla’s work to prepare the site for drilling [4]. Surveys have shown that public opposition to fracking is far higher than support, with just 18% supporting [5].

The action today is part of Reclaim the Power’s Break the Chain fortnight of action targeting fracking supply chain companies. Break the Chain aims to disrupt and expose the networks propping up fracking in the UK – from firms  supplying equipment, to PR companies – ahead of further action this summer supporting locals resisting drill sites in Lancashire and Yorkshire.