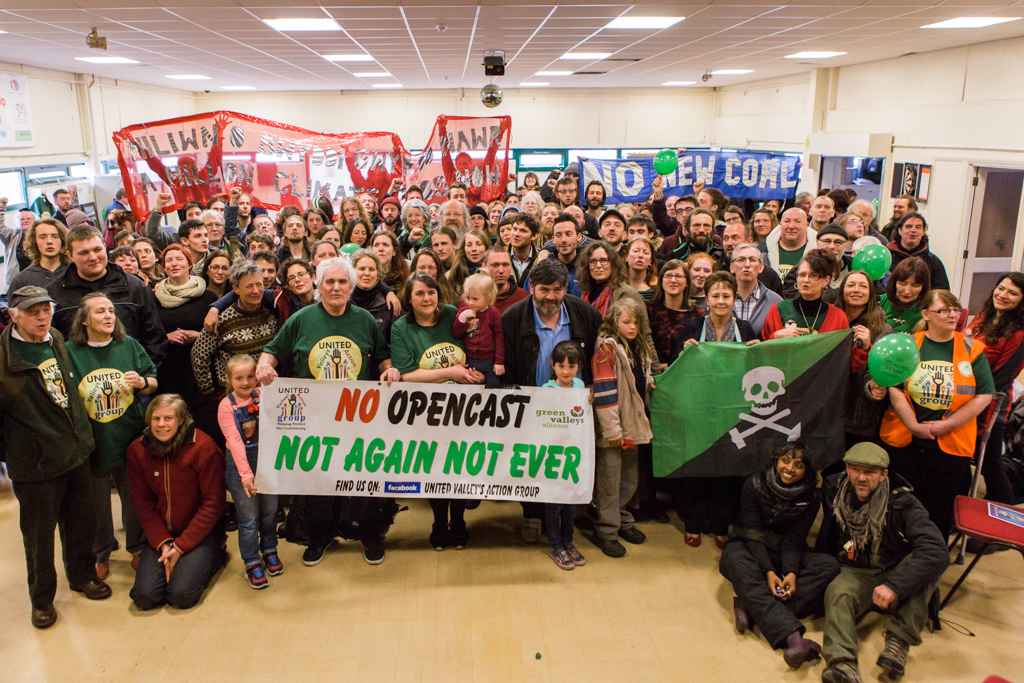 On the second day of the End Coal Now action camp, Reclaim the Power and United Valleys Action Group hosted a celebration of the local community’s efforts to see off opencast coal mining, once and for all.

The ‘Solidarity Sunday’ event at Fochriw Community Centre brought together residents, councillors, unions and Assembly candidates to celebrate the achievements of the local community fighting a new opencast mine at Nant Llesg – which a local campaigner explained would be 46 times the size of Cardiff’s Millennium Stadium.

“If we can tip the balance of power, we can put this to bed forever and get on with our lives”, said Chris Austin, a “battle-hardened campaigner” (in his own words) of the United Valleys Action Group.

There were whoops from the crowd at the recent news that Aberthaw power station, the UK’s dirtiest coal plant, will be scaling down operations – which effectively removes the “sustainable customer” needed to justify planning permission for a new opencast mine in south Wales.

“There’s nothing going for this new mine, which would destroy the upper Rhymney valley for another 15 years. The world is moving away from coal, and it beggars belief that we find ourselves in this position when the community has spoken: there’s absolutely no call for this mine in our local area,” Chris told the packed room.

Two members of the Caerphilly county planning committee were applauded for standing up to intimidation from coal company Miller Argent, and rejecting the Nant Llesg mine last August. They told the audience, “We can’t forget community.”

Liz and June said they were here to “carry on the fight with all of you”, asking “when there’s such pretty local villages around here, why destroy the? We have enough energy from the wind and sun.”

The family-friendly event included craft activities for children, and participants collaborated on a giant banner reading ‘Green Jobs (Not Dirty Coal!)’ to be used on Tuesday’s mass action against the existing Ffos-y-fran mine near Merthyr Tydfil.

Reclaim the Power explained that this action will show people are “willing to put our bodies on the line and say: no more coal.”

A speaker from the PCS union talked about the one million climate jobs campaign, calling for public investment into a “just transition away from fossil fuels that is collective, democratic and fair.”

Jo, a clean energy developer, joked that there will be lots of conversations about the weather this weekend – but that using the elements as renewable power, Wales could create double the energy needed across the nation.

She described how local campaigns like these are already changing planning power and practice for developers who “need to sit up and listen to what local communities are saying.”

Assembly candidates from the Green Party and the Liberal Democrats also joined to support the campaign against the proposed Nant Llesg mine.

Alice Hooker-Stroud, leader of the Welsh Greens said she was backing the community and Reclaim the Power who were “up against big companies which don’t take responsibility or care for our local communities and our jobs.”

She described how renewable energy can provide “truly sustainable” jobs all across Wales, with fewer communities left behind or dependent on one major employer.

Bob Griffin, the Liberal Democrat candidate for Merthyr Tydfil and Rhymney described how respect for the coal industry is deeply engrained in the local area, but that opencast mining is seen as “unhealthy and dirty”. He also praised the potential for up to 5000 jobs in green industries across Wales.

Back at the camp, residents from Rhymney and Merthyr described how they’re having to paint their houses different colours to avoid coal dust from Ffos-y-fran mine staining the outside walls. Sam said, “I washed the wall the other day and the difference is crazy. It was red brick but the dust blowing over had made it black.”

His friend Ffion said the dust from the mine affects their daily lives “way more than you’d think,” while Michael said the proposed new mine had “no chance”.