Why I went to Brussels? TTIP Game Over. 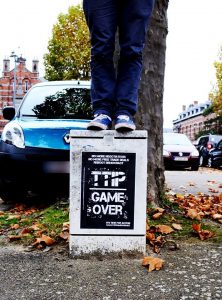 On Thursday 4th November 400-500 people from all over Europe gathered to take part in TTIP GAME OVER, a weekend of direct action, civil disobedience and creative stunts to highlight and put an end to TTIP, CETA, TISA and all future free trade deals.

TTIP GAME OVER follows the climate games model, inviting collectives and individuals from all over the EU to take part in planned actions or to bring their own agendas and targets. This was round 2, the aim to highlight the key players and benefactors in these agreements.

The trip started off on a high. Unscrupulously dressed to blend-in, activists took to the bars near the European Parliament that the lobbyists frequented on a Thursday night. Aside from the few faces we’d arrived with, it was impossible to tell if anyone else was there for the same reason. As inconspicuously as possible we glanced around, trying not to stare too much at the military carrying huge guns. We knew to wait for a signal, which was about as much information as anyone we spoke to seemed to know. Suddenly, a flare lit the sky and hundreds of people emerged from the crowds moving towards the center singing “do you hear the people sing, singing the song of angry men.” The comedic element of singing a song from the west-end hit Les Miserables seemed lost on the rest of the crowd, and we were soon swept along with a song very clearly calling for revolution.

Flares, fireworks, food, music and madness, the square was declared a TTIP (and CETA) Free Zone, and the tone for the rest of the weekend was very clearly set. Over the next few days of immaculately planned beautiful chaos, Brussels was overrun with NO CETA, NO TTIP messaging, from Brandalism to graffiti, animal flashmobs in Bayer/Monsanto’s HQ to blockading the entrances of the European parliament, the variety of actions was vast, and incredibly well documented. If I took anything away from this trip, it was the excitement of knowing that at least one entire city had been fully notified that TTIP and CETA are not in the public interest, which is perhaps why various parliaments in Belgium were the only ones that blocked CETA at the signing stage! 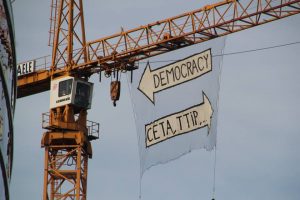 Banner drop on a crane by the European Commission

So what are TTIP and CETA and other such trade deals, and why are they so bad?
The first thing to note is that we are absolutely not against trade. Everyone needs their Sunday roast, we just need to know that the chicken is not washed in chlorine and that we will be able to view whether or not it has been on the packaging! Through ‘harmonization of standards’ TTIP and CETA would allow US/Canada standard chlorine chicken into European markets, where this low standard of meat has previously been banned. These agreements also override the European laws on the labeling of food, so you wouldn’t even know if you had bought it!

TTIP and CETA are two multi-lateral trade deals being negotiated between the EU and with America and Canada respectively. Because of Brexit we are unlikely to be effected by TTIP as it is still in the negotiation stages. CETA has already been signed and it will be implemented in the UK until the Brexit negotiations have concluded and we leave the European union officially .

These free trade deals seek to reduce hard-earned regulations to enable more freedom of trade. Regulations such as workers rights, environmental safeguards, food standards, banking safeguards would all be lowered. Both agreements contain an investment chapter, stating that ISDS (or ICS) courts would be established, allowing businesses to sue governments for potential lack of profit. So if fracking was banned in a country that already had fracking investors with businesses in those countries, the fracking company could sue for potential lack of profit. If health legislation was introduced to increase the size of health warnings on tobacco packets, the tobacco companies could sue. Both of these are real examples of ISDS/ICS cases. The former was won by a fracking company in Canada, and the latter was lost by Philip Morris in Australia, but the Australian government still had to pay $100,000’s in court fees, straight from the tax payers pocket.

TTIP GAME OVER after movie:

What struck me about TTIP Game Over was that most people had become involved through their engagement with climate activism. More and more people were realizing that the link between environmental struggles and economic models were inseparable. These trade agreements act as an irreversible manifestation of neo-liberal capitalism in its wildest form, with huge amounts of power placed in the hands of businessmen and solidified in a legally binding text. The content of these agreements undermines most of the progress made by climate activists over the past 50 years, and the need to stop them is overwhelming.

In Brussels, the lobbyists and parliament know we are on to them.
The signing of the agreement (earlier in the week) was moved at the last minute, the time and date announced at midnight on a Friday night, with the attempt to stop activists from protesting the signing. We did find out and we sure as hell did protest. These politicians are afraid. Never before have I been involved in a campaign that has unified and galvanized so many different campaign groups and activists with so many different agendas, but a common enemy. The fight is real, and we will win. “We are unstoppable, another world is possible.”