I helped blockade a coal power plant in Wales. Here’s why. 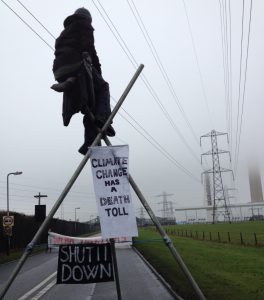 Aberthaw is one of a dying breed of coal-fired power stations still running in the UK. Unlike the panda or the rhino, though, it’s not an endangered species whose final demise will make me lose much sleep. I was one of 10 protesters who blockaded the entrance to the South Wales power station this morning and this is why.

The arguments against coal are overwhelming. As a result of its toxic fumes, 400 people are estimated to be dying from the effects of Aberthaw’s dirty business every year. The lethal quantities of NOX which it belches day in, day out are a huge cause of respiratory illness in the area.

Meanwhile, a consensus has finally been reached that in order to have any chance of halting runaway climate change, coal, as the dirtiest fossil fuel, has got to go, and fast. It’s almost a year to the day since we saw images of global leaders applauding each other following the successful signing of the Paris climate deal. Governments are now ratifying this agreement which makes patently clear that we need to be leaving the vast majority of fossil fuel reserves in the ground.

Along with a whole host of other climate-wrecking policies like cuts to renewables and airport expansion, the UK government is dragging its heels, with a public consultation currently underway for a coal phase-out 10 years from now. In the case of Aberthaw, for many years the government has simply turned a blind eye, though the European Court of Justice has recently ruled that it is in breach of air quality laws. With the impacts of climate change already being felt and local people’s lives marred by coal mining, action needs to be taken now.

The government may claim that Aberthaw is indispensable to the Welsh economy but don’t assume the ‘black gold’ will come from the valleys themselves in the future. Despite the Welsh Assembly voting last year in favour of a moratorium on opencast coal in Wales, the energy company which runs the power station, RWE, is considering replacing this with imports from probably Columbia and Russia. So instead of gaping scars like Ffos-y-Fran near Merthyr Tydfil, which was shut down for a day by 300 activists earlier this year, it will be respiratory illnesses and human rights abuses for indigenous communities elsewhere. To top it off, RWE operates the largest and most CO2-emitting mines in Europe, in the Rhineland coalfields of West Germany.

Ultimately, it doesn’t matter where Aberthaw’s coal is coming from: it’s time to consign this relic of nineteenth century industrialism to the dustbin of history, along with the other remaining UK coal-fired power stations. Real people are losing their lives while Aberthaw is kept on life-support and this has to stop. Instead of subsidising a toxic polluter, we could be investing in the clean, secure and jobs-rich energy of the future.