London, UK – Today activists exposed the ‘naked truth’ by  bearing an anti-fracking slogan on their backs and carrying out a noise demonstration in protest of Union Jack Oil’s stall at London’s UK Investor show,. This action is part of the national ‘Break the Chain’ fortnight of action by Reclaim the Power [1].

The conference attendees include over 100 major growth companies, brokers and public limited companies, many of whom represent the oil and gas industries. Over 50 CEOs and investment ‘experts’ will be speaking at the event. [2] The disruption sought to highlight some of those implicated in the fracking industry. 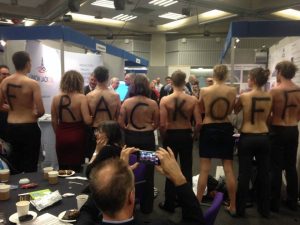 A participant in today’s action commented:

“We have put our bodies in the way today, to protest the work of Union Jack Oil in furthering the fracking industry and to disrupt their reputation.  UJO has been exploring for unconventional oil and gas and doing field development work for possible future fracking sites in the UK for the past two years. Whilst they regularly attempt to disguise their actions behind legal jargon, they have used flow testing and acid fracturing to develop the case for unconventional oil and gas extraction, either by them or another company. It is essentially gateway drilling.

The 2015 Paris COP21 summit showed that radical change is needed in the attitude to our environment to avoid catastrophic climate change. Not only will fracking scar our countryside with drill sites, it will entrench our addiction to fossil fuels and put us back years in securing sustainable energy sources for our planet.”

The action took place in the conference centre in full view of many of the high profile delegates and investors. It follows on from recent suggestions that secret industry conferences are looking to further the fracking agenda without creating adequate space for civil society the voices of opposition. [3]

“Everyone is becoming more aware of the equipment suppliers and haulage companies propping up the fracking industry because they are physically visible delivering to the fracking site in Lancashire. Events like these doing the dirty work behind the scenes and are just as implicated and dangerous. They should be exposed. For too long these events have excluded our voices, we’re sure they won’t be able to ignore our bodies today”.

At least five companies in the fracking supply chain have already pulled out after public pressure [4]. Protests by locals have also been taking place every day at one of the proposed fracking sites in Lancashire, slowing and often halting Cuadrilla’s work to prepare the site for drilling [5]. Surveys have shown that public opposition to fracking is far higher than support, with just 18% supporting [6].

Reclaim the Power is a UK-based direct action network fighting for social, environmental and economic justice. They have been working to oppose fracking since organising mass action at Balcombe in 2013. Since then, they’ve hosted anti-fracking action camps in Blackpool and Didcot, and taken countless actions against the industry. Read more at: www.reclaimthepower.org.uk