Today  protesters have blockaded the entrance to PR Marriott, a company providing the drilling rig for Cuadrilla’s fracking site at Preston New Road. The drilling rig is expected to be transported from PR Marriott’s storage yard near Chesterfield any day now. 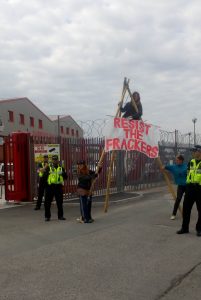 Bristol Rising Tide [1] joined with activists from the protest camp at Marriott’s Drilling in Chesterfield. The two activists from the protest camp are locked on with an arm tubes for six hours before they were cut out.  Two Bristol activists were alongside them on bamboo tripods blocking access to the yard.  They were finally brought down and arrested after seven hours.  All were charged with aggravated trespass.

Sarah Howell from Bristol Rising Tide said “A sustainable future is impossible under capitalism, which exploits and damages people and the environment, from Lancashire to Standing Rock.”

Today’s action comes as part of the ‘Rolling Resistance’ month of action, organised by local campaigners [2] and national network Reclaim the Power, [3] aiming to disrupt work at Cuadrilla’s site every day in July. Since the beginning of the month work has been disrupted for 8 working days, the longest blockade on July 3rd – 4th lasting 36 hours. [4]

A campaigner from Standing Rock is due to visit the camp at Preston New Road today. The Standing Rock Sioux Tribe are fighting to protect their water and ancestral lands from the Dakota Access Pipeline. [5] [6]

Following years of local resistance to fracking in Lancashire, growing protests by local community members have been taking place every day at Preston New Road since January, to say “Not here, not anywhere” to fracking. This has caused months of delays and millions of pounds of losses for Cuadrilla, and supply chain companies are cancelling their contracts. A new survey by YouGov has shown that 66% of Lancashire residents oppose fracking near their homes. [7]

All those arrested will need our support in the coming weeks.  They will all be appearing in Chesterfield Magistrates Court on August 15th.

3. Reclaim the Power is a UK-based direct action network fighting for social, environmental and economic justice. They been working to oppose fracking since 2013 when they organised mass action at Balcombe. Since then, they’ve hosted anti-fracking action camps in Blackpool and at Didcot Power station, and taken countless actions to expose and resist the industry as well as the businesses in its supply chain. Read more at reclaimthepower.org.uk