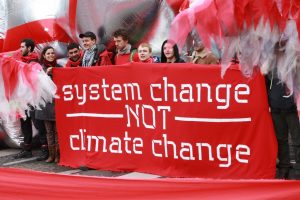 Visually and creatively we will focus on the polluting aviation industry, the affluent minority who are driving the so-called ‘need’ for aviation expansion, and the 300,000+ people who are already suffering from the effects of climate change, and who are paying the price of this luxury lifestyle with their lives.

There will be three main ways that people can participate in the day of action, individually and as part of affinity groups that will have autonomy over how they operate.

This will be family-friendly and inside a publicly accessible airport building, consisting of 2 ‘acts’:

Act 1 – The Die-In
Hundreds of us will lie down on the floor at exactly the same time, representing the 300,000+ people who are already dying each year, all over the world, from climate change related causes. Watch out for the people waving red hankies, giving the visual cues for ‘go’ time.

Act 2 – The ‘Frequent Flyer High Polluters Club’ VIP Check-in
A small group of people to represent the wealthy frequent flyers, who fly the most, and are driving the ‘need’ for aviation expansion in the UK.
N.B. If you would like to be part of this act,  please email aviation@reclaimthepower.org.uk ASAP to let us know in advance, so we can give you some specific instructions?

Bring luggage, and dress like a regular traveller. The more you can integrate into the crowd, the less likely you are to be spotted by security. If you want to be a frequent flyer, you will need to dress smartly, looking like the high earning ‘binge’ flyers with second homes abroad, who fly the most.

Meeting location:   Car park of Hatton Cross tube station (Piccadilly Line) to collect a prop and further instructions for where to go next. Arrive between 12pm and 1pm (we will be gone by 1pm) 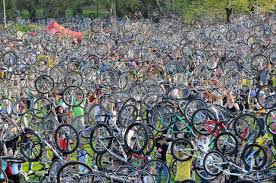 This will be a mass bike ride, visiting a couple of specific locations on the way, including a local immigration removal centre which uses the airport for its deportations. For security reasons the route can only be made available on the day. Expect bike sound systems, banners, flags and loads of fun

Bring your bike, and wear red! We will be riding in a RED convoy with hundreds of others, representing the red line that airport expansion crosses, if we want a socially just and liveable planet for all.

Meeting location:   Grow Heathrow (Vineries Close, Sipson, UB7 0JH) to collect a prop and to start the ride.  Arrive at 12pm (ride will start at 12:30pm)

Autonomous affinity groups are also invited to take creative action elsewhere, as part of the day of action, adhering to the same action consensus.

The demo will be covered by Legal Observers, who’d be really happy to answer any questions you have about your rights on the day. If you’d like more information in advance we recommend the bespoke ‘Bust card’ created for #staygrounded. These will also be given out on the day.

Also check out Green & Black Cross’s general advice when preparing for an action – though it should be noted that, due to local bylaws, this advice should be taken in conjunction with what’s on the bust cards.