WINDSOR, UK — This morning a group of anti-frackers from Reclaim the Power occupied Centrica’s head office and threw a party for CEO, Iain Conn, congratulating him on his controversial £1.4 million ‘fracker’s bonus.’

The group went to celebrate with Iain Conn to highlight Centrica’s ties to the fracking industry – they are a significant stakeholder in Lancashire fracking operations. They celebrated by awarding a giant cheque, spraying champagne and throwing confetti. 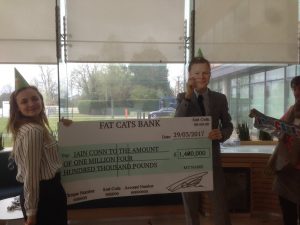 One of the activists, dressed as a Cuadrilla executive, gave the following speech:

“We’re here at Centrica’s offices to say congratulations to Iain on his well-deserved £1.4 million fracker’s bonus. Without his company bankrolling fracking in Lancashire, the industry would be dead in the water.

“Fracking may be devastating to local communities and have no public backing, but kudos to Iain for sticking with it through the tough times. Going forward, we hope Centrica continues to profit from Lancashire’s sacrifices, and that you can use your millions to shield yourself from climate catastrophe.”

As well as their controversial investments in Cuadrilla, Centrica have faced criticism for their links with climate denial think tank Texas Public Policy Foundation, to whom they have made significant donations [1].

Centrica – who own British Gas – have also been criticised for the size of Conn’s pay boost in light of the millions of UK families living in fuel poverty; £1.4 million would be enough to pay the energy bills of nearly 4000 of their customers [2].

Today’s stunt was the third in the ‘Break the Chain’ fortnight of action, where groups around the UK are targeting companies propping up the fracking industry [3]. Actions targeting an aggregate supplier and water company have already taken place this week.

Reclaim the Power targeted Centrica due to their 25% stake in Cuadrilla’s Lancashire operations, of which £60 million directly supports exploration work [4]. Cuadrilla owns licences for a number of fracking sites including Preston New Road where there is massive public opposition from local communities [5]. Only 18% of the British public support fracking [6].

Reclaim the Power are hoping the fortnight of action will disrupt and expose the network of companies supporting fracking, and encourage more to pull their contracts; at least 5 companies have already done so after increasing public pressure [7]. ‘Break the Chain’ comes ahead of expected further action this summer supporting locals resisting drill sites in Lancashire and Yorkshire.

NOTES:
Leaked TPPF donor lists from 2010 showed that Centrica’s US subsidiary, Direct Energy, was among their largest donors that year, with a payment of $20,000. (http://www.greenpeace.org.uk/media/press-releases/british-gas-owner-centrica-funding-climate-denial-group-linked-trump-20161216)

See coverage in the Guardian (https://www.theguardian.com/business/2017/mar/22/pay-rise-british-gas-owner-centrica-iain-conn-rising-prices)

For examples, see Drill Or Drop

Reclaim the Power is a UK-based direct action network fighting for social, environmental and economic justice. They have been working to oppose fracking since organising mass action at Balcombe in 2013. Since then, they’ve hosted anti-fracking action camps in Blackpool and Didcot, and taken countless actions against the industry. Read more at: www.reclaimthepower.org.uk